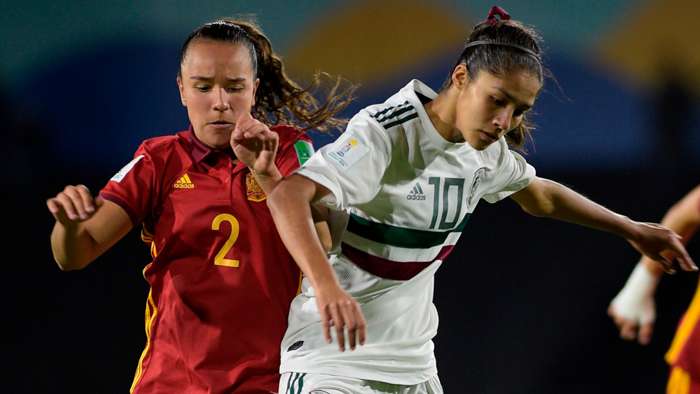 Atlas forward Alison Gonzalez has spent the last few years establishing herself as a goal-scoring sensation in Mexico – and she has ambitions of showcasing her talent in Europe in the future.

The 19-year-old ranked third in 2021swomen’s NXGN listafter a sensational last 12 months. She has scored 30 goals in Liga MX Femenil since August and made her senior international debut in February, as Mexico beat Costa Rica.

Gonzalez’s current aims are to help Atlas to Liguilla, the league’s post-season finals, but she has her eyes on bigger things further down the line, including a place at the 2023 Women’s World Cup.

Speaking in an exclusive interview with Goal, Gonzalez said she has “always” thought about her future.

“I’m not a person who says, ‘oh, let’s see what comes out’,” she explained. “My biggest dream is to play in Europe, that’s one of the things Ive grown up with since I was little.

“Also, I want to study architecture. That is my biggest dream, being able to act as an architect and be near with my family.”

She also has dreams of success in her international career. The forward has already reached finals with the youth national teams, picking up runners-up medals at the 2018 Under-17 World Cup and the 2020 CONCACAF U20 Championship.

In both of those campaigns, Monica Vergara was Gonzalez’s coach. Now, Vergara is the head coach of Mexico’s senior team, having been appointed in January. In her first game in charge,she gave Gonzalez her senior debut.

“I know her very closely, shes a person who makes you believe everything she says and fight for your dreams,” Gonzalez said.

“For me, shes a fundamental person in my career. Shes driven me somuch. The national team is in good hands, I tell you. Were going to be fighting for a lot of things. There will be difficult times, but I know its going to be a good era."

Asked whether she pictures herself playing at the World Cup in 2023, Gonzalez said: "Believe me, yes, but its hard work, every day. We have to keep showing it so we can get to that list.”

Gonzalez placed third in this year’s women’s NXGN list, with only Rosengard midfielderHanna Bennison, the 2021 winner,and Ajax striker Nikita Tromp finishingabove her, making her the highest ranked non-Europeanon the list.

“I am very happy, very grateful. I didn’t expect this,” she said about her achievement. “It means a lot in my career and in my life. It means I’m doing the right things. I’m also grateful to my colleagues.

“It’s motivating to be receiving this award. At my age it is something very inspiring for me personally, but yes, [I have] to focus on everything I am doing, to realise that I’m in everyone’s eye, to be an example and to behave as such.”

Gonzalez also credited her club, Atlas, for helping her thrive and receive the attention she is.

“Atlas has a lot of influence," she said."I’m going to thank the institution all my life for giving me the opportunity to get here.

“I’m so happy. Being able to see my family has been a very important thing for me. Atlas gave me the tools to be today fighting for one of these awards, always looking for the championship and improving personally.”