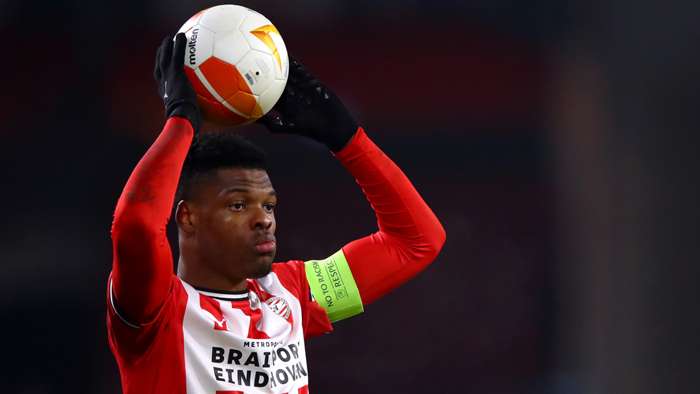 Netherlands international Denzel Dumfries has admitted that he hopes to make a move abroad to the Premier League, even as he continues to discuss a contractextension with PSV Eindhoven.

The 24-year-old has been previously linked with interest from both Arsenal and Newcastle United, and has now opened up on his ambitions to test himself as he approaches the prime of his career away from his home country.

Dumfries has also conceded that he may have already left the Eredivisie had it not been for the Covid-19 pandemic, while stating that he hopes to finish on a high with a domestic title.

"We are in talks and the intention, as it stands, is to extend my contract," the defender toldVoetbal International. "But a contract extension does not automatically mean that I will stay here longer.

"My interests currently align with those of PSV of course - but I also have my own career. There are new things on the horizon for me.

"A departure did not happen due to the pandemic and I am very happy at PSV. But I do feel that, as a footballer and as a person, I am ready to take the next step abroad.

"The Premier League and the Bundesliga, they suit my game. I can see the headlines again, but I think I can say this and I think everyone can see that I am ready to move on.

"I have played for four years at the highest level in the Netherlands and have played more than a hundred matches for PSV. It will soon be time for the next step but a title will be the icing on the cake."