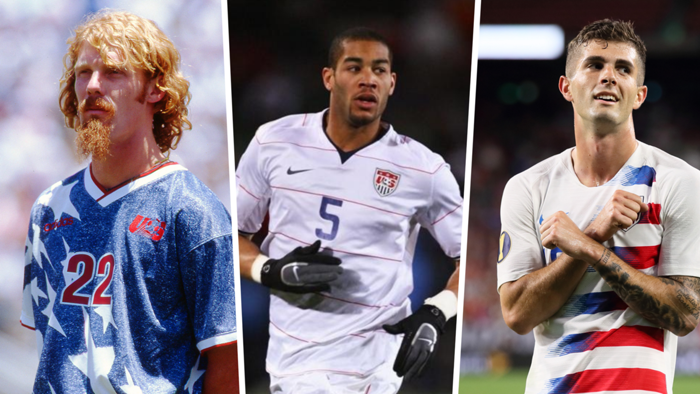 For an entire generation of American soccerfans, there are no words to truly describe what the 1994 World Cup meant.

It was a turning point that showed that soccer was finally a sport worth caring about and maybe, just maybe, a sport that can turn into a livelihood.

Oguchi Onyewu was a member of that generation, one that was captivated by what turned out to be a life-changing summer of soccer.

The American-born son of Nigerian immigrants, then-12-year-old Onyewu watched on as the world's biggest tournament took place in the U.S., lighting a torch that he and a generation of U.S. men's national team stars would eventually run with whilelifting American soccer to new heights.

Right now, the U.S. is preparing for another one of those groundbreaking moments, and Onyewu believes that the impact this time around will make those old World Cup memories look like nothing more than a starting point.

In 2026, the World Cup will return to the U.S. as part of a three-way hosting split with neighbours Mexico and Canada.

Over 30 years after the game truly arrived on American soil, the 2026 tournament serves as a long-awaited sequel,and Onyewu believes that this one will prove an even bigger cultural phenomenon.

Onyewu was a product of that 1994 World Cup, becoming an integral part of the USMNT for a decade. The former Newcastle, Standard Liege, AC Milan and Sporting C.P. defender earned 69 caps throughout his career, becoming a mainstay for the U.S. at the 2006 and 2010 World Cups.

Baltimore is one of 17 cities vying to host matches during thetournament, but the only one that does not have an MLS franchise in the immediate vicinity.

Yet, Onyewu, who grew up in nearby Olney, Maryland, believes that the city, and the D.C, Maryland, Virginia area- affectionately known as the DMV -has proven to be a soccer hotbed that would embrace the beautiful chaos of a World Cup.

He added: "I do believe that this is gonna beawesome for the younger generation.It's gonna be amazing to see the impact that it'sgoing to have and I'm excited to get the opportunity to tie Baltimore and my home state back into this. This will be, it could be, a legacy for the cityand for the DMV for decades to come."

While Onewyu is a former player and now an ambassador, he isalso a fan. He was left disappointed by the USMNT's failures to qualifylast time around in 2019, robbing a group of players of the chance to have the experience in Russia that he did in Germany and South Africa.

As he looks on, Onyewu believes that this new generation will be unfairly asked to atone for those 2018 failures, and that they will have to prove that they're good enough to overcome such pressures.

So farthey have done just that. Americans are moving to Europe's top teams more than ever before, with Christian Pulisic starring at Chelsea, Tyler Adams scoring Champions League-winners for RB Leipzig and Weston McKennie joining Juventus.

There are a handfulof young Americans scattered throughout the world's top leagues, and that gives Onyewu hope.

Perhaps the most inspiring part, he says, is their youth. This, in theory, will be a group that sticks together for years to come, through 2022 in Qatar and, hopefully, 2026 on home soil.

"I really believe that they have an immense amount of talent in that pool andthey are young," he says. "So one thing with talent, when you're young you don't have the experience yet, and I think right now they're learning the experience.

"Hopefully theywill bring back much-needed know-how to the national team programin some way, shape, or form and then we can push this forward.

"Let's be honest - with the national team, it's not getting older anytime soon, right? They have years to grow into each other until they're able togel into what we expect them to become."

If that happens, the current generation will get to experience moments like Onyewu, Landon Donovan, Clint Dempsey, Tim Howard and DaMarcus Beasley did throughout their decorated careers.

And, just like the 1994 team inspired Onyewu and how Onyewu's team inspired this group, perhaps they willbe the ones that usher in the new generation.

"There's nothing like a World Cup, I don't even know if I can explain it to you because I was the player in two of them in Germany and South Africa andthere is nothing that can emulate the excitement around a World Cup.

"I think that that's going tojust ignite that soccer love, even more so than it is now."