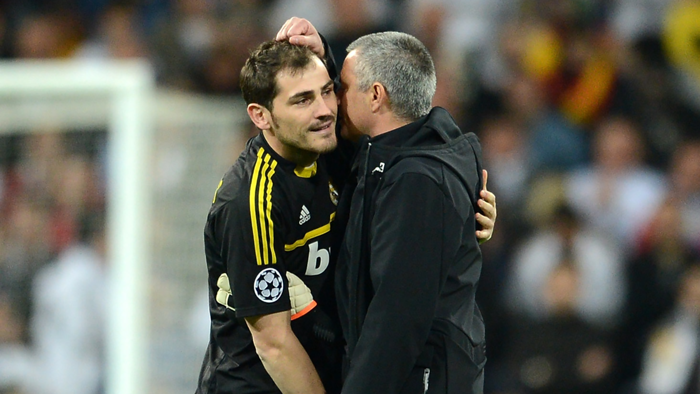 Jose Mourinho has claimed that he and Iker Casillas have repaired their relationship after the pair repeatedly clashed during their time at Real Madrid.

Among the honours the 39-year-old secured during his career are two European championships and one World Cup with Spain, and five La Liga titles and three Champions League crowns with Real Madrid.

Near the end of his run with Real Madrid, Casillas fell out with Mourinho, who dropped his side's long-time starter in favour of Diego Lopez.

After clashing with Casillas and Sergio Ramos among others, Mourinho departed Madrid at the end of the 2012-13 season to re-join Chelsea.

Now managing Tottenham, Mourinho has claimed that he and his former goalkeeper have patched things up and paid tribute to Casillas as he officially called time on his playing career.

"His intelligence and maturity have made us always respect each other and years later we have even been able to cultivate an honest friendship," Mourinho told AS before acknowledging the pair's difficulties in the past.

"He is a historic goalkeeper for Real Madrid, La Roja and world football," Mourinho continued. "With him I won La Liga and with him I had difficult moments due to my professional and never personal decision to play another player."

Mourinho added that Casillas is a "great goalkeeper and a great man".

After a decade and a half with Madrid, Casillas departed the Spanish capital in 2015 and joined Portuguese giants Porto.

The goalkeeper made 156 appearances and won two league titles with Porto before suffering a heart attack in May 2019. He was unable to return to the pitch after that incident.

Officially bidding farewell to the game, Casillas posted on social media: "The most important thing is the path you travel and the people who accompany you, not the destination that it takes you.

“I think I can say, without hesitation, that this has been the right path and the dream destination. Thanks.”