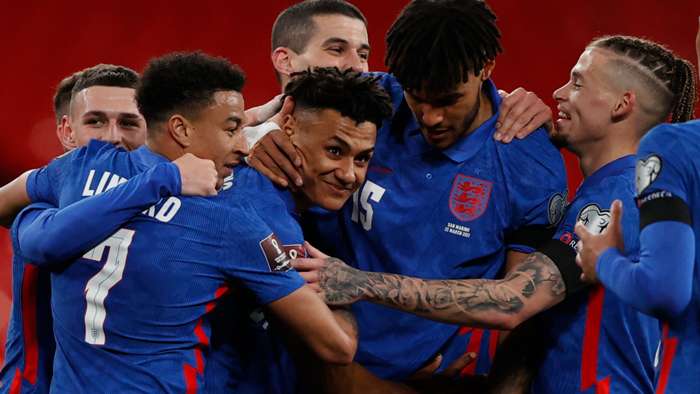 England will be looking to make it six points from six in their World Cup qualification campaign when they travel to Tirana to take on Albania on Sunday.

The Three Lions ran out comfortable 5-0 winners in their opening group game at home to San Marino on Thursday, taking an early lead in Group I in the process.

Having won all four of the previous meetings with this opposition, they are 2/7 (1.29) favourites with bet365 to consolidate that position by coming out on top at the Air Albania Stadium.

Edoardo Reja’s men laboured to a narrow 1-0 win over minnows Andorra in their opener and are lengthy 10/1 (11.00) outsiders to follow that up with a shock win here.

The guests have drawn just one of their last 14 matches in all competitions, but you can get odds of 4/1 (5.00) on them being held to a disappointing stalemate in this one.

Nedim Bajrami is still awaiting authorisation from FIFA to make his debut for the home side, having decided to switch allegiances from Switzerland in favour of the country of his heritage.

Harry Maguire and Harry Kane are likely to return to the starting line-up after being rested completely for Thursday’s win over San Marino.

Although they did find the net on five occasions, Gareth Southgate’s team was guilty of profligacy in front of goal against San Marino considering they had over 30 attempts.

While Kane’s return should add an extra dimension in attack, they may still struggle to break down a home side that is rarely easily beaten in their own backyard.

Indeed, the Eagles have conceded more than twice in just two of their last 34 competitive home games, restricting France to just two goals in their final European Championship qualifier here.

What’s more, England managed more than one goal in just two of their six recent UEFA Nations League matches, scoring seven times in six games on their way to finishing third in thegroup.

With this in mind, odds of 19/20 (1.95) seem like decent value on under 2.5 goals being scored for Albania’s 10th home World Cup or European Championship qualification match in 15.