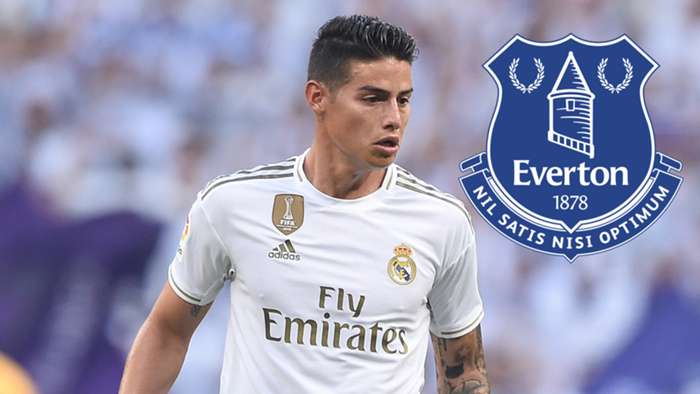 James Rodriguez's agent Kia Joorabchian says Carlo Ancelotti played a key role in bringing a "world superstar" to Everton, and has backed him to bring the best out of the ex-Real Madrid playmaker.

Everton confirmed James'sarrival at Goodison Park from Madrid in a £22 million ($29m)deal on Monday afternoon, with the 29-year-old signing a two-year contract with the club.

The Colombia international will now link up with ex-Blancos boss Ancelotti once again on Merseyside, having also played under the Italian during a loan spell at Bayern Munich.

James was linked with a number of top clubs across Europe after falling out of favour with Zinedine Zidane at Santiago Bernabeu, but ultimatelydecided that the Toffees had the best project for him to get on board with at this stage of his career.

The former Madrid star has become Everton's second major signing of the summer after Brazilian midfielder Allan, who joined the club from Napoli for a reported £25m($33m) on Saturday.

Ancelotti also coached Allan during his last managerial post at Napoli, and Joorabchian has credited the 61-year-old for pulling off an impressive double-transfer swoop ahead of the new season.

“James is a world superstar,” the super agent told talkSPORT. “He has 47m followers on Instagram and has played for the best teams in the world in Bayern and Real Madrid.

“The ‘Ancelotti factor’ played a big part in the deal. Everton now have a very big and important manager who has won everything and knows how to win.

“And Everton’s will to press and go forward… I have to say Farhad Moshiri, Everton owner has given so much, he’s backed every manager he’s had and he’s bought whatever the mangers have asked. He’s taking the club up to that level.

“Bringing in experience with Allan and James, who Ancelotti knows really well and he knows how to get the best out of him, that’s the key. He did that at Munich and Real Madrid.

“Ancelotti has a four-year deal and he wants to make this work; he started with a young side and wants to bring in experience."

Joorabchian went on to express his belief that James will be a valuable addition to Ancelotti's ranks at Everton as long as he can stay in peak physical condition, having seen his clientfinally make the switch to the Premier League after many years of speculation.

“I thinkif he can keep James on the pitch and as fit as possible I think it’ll be an incredible signing for Everton," he added.

“I think you’re going to see the best of him in the Premier League, he had an up and down year last year with his injury, but now he’s fully fit.

“He’s a player Premier League clubs have wanted to bring in since the 2014 World Cup, and he’s been close to coming a couple of times, the deals have been a little bit high.