Are Chelsea the envy of Europe? Lampard has reserves that would walk into other top teams 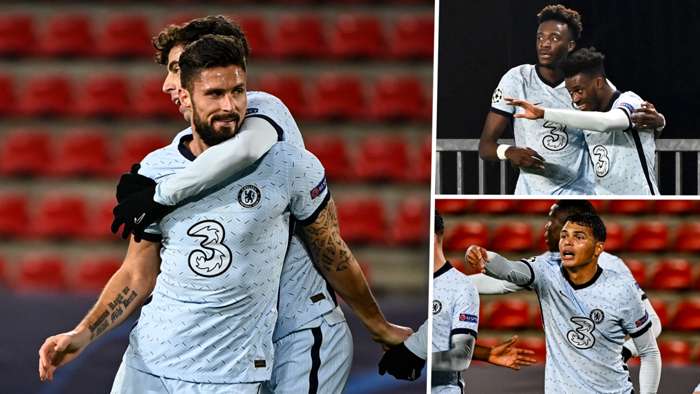 Chelsea are blessed with luxuries that others simply do not possess.

Very few sides in Europe can boast such strength in depth and it is a major advantage given the club calendar has become so incredibly congested due to the effects of the Covid-19 crisis.

Of course, having so many options means a host of outstanding players must make do with a seat on the bench.

Certainly, Giroud's decisive 91st-minute headed winner in France seemed as much powered by frustration as his neck muscles. The Frenchman obviously had a point to prove in his homeland.

The 34-year-old has admitted that he will push for a move in January if he doesn't play more, as he is desperate to lead France's attack in next summer's European Championship.

However, Lampard can only field 11 players and his usual starting line-up is both improving and delivering on a weekly basis, leaving the manager with tough decisions to make.

"With Oli, I have to look at it on a game-by-game basis," the former midfielder told reporters after a poor game decided not by tactics but star power. "At the moment, Tammy Abraham is in great form as well. But I think Oli knows how happy I am with him. I hope he knows how much I rely on him too.

"Every player wants to play every game and that's an impossible part of my job to keep them all happy but hopefully he understands that and feels content nonetheless.

"You saw the reaction of his team-mates when he got the goal. He's so professional in how he trains and looks after himself that age isn't even a factor for him. If anything, he's getting better with age in terms of how he looks after himself.

"So, he offers a lot for us and although I know I keep saying it, we have a tough schedule coming up and the way we play means I'll be relying on a lot of players.

"Thankfully, Oli's a player that always retains the right attitude if he's not playing regularly, and I know when I call upon him, he'll deliver, as he did tonight."

Callum Hudson-Odoi has been just as frustrated as Giroud by his own lack of game time, particularly with Chelsea having rejected an offer from Bayern Munich for the winger during the summer.

It was a loan deal with an option to buy that the 20-year-old was open to accepting, having seen himself slip down the pecking order following the arrival of a spate of attackers at Stamford Bridge during the off-season.

Indeed, the game in Rennes represented only his fifth start of the season, so he was understandably keen to make a mark. He did that in fine fashion.

Both his first and second touches were excellent as he latched on to a sublime ball from Mason Mount before coolly firing past Alfred Gomis to make it 1-0 to the visitors.

Hudson-Odoi's goal had arrived just moments after he had fashioned a glorious chance for Chelsea's £47.5m ($63m) striker Timo Werner, who somehow blazed over the bar.

As well as providing plenty of creativity, the England international also worked hard and could be seen tracking back into the right-back position, regaining possession on three occasions in total.

It was a timely show of quality from Hudson-Odoi. Christian Pulisic is set to return from injury ahead of Chelsea's massive Premier League clash with Tottenham at the weekend and Hudson-Odoi might not have even have featured had the U.S. international been fit to start for France.

That merely underlines the embarrassment of riches at Chelsea right now. There are players on the bench that would walk into most English or even elite European teams, who would be forgiven for casting envious glances in the direction of west London.

Chelsea have three internationals battling for the left-back berth and five such options at centre-half. Meanwhile, Scotland starlet Billy Gilmour is ready to compete for a starting spot in midfield again after making his comeback at youth level for club and country.

Given the amount of players he has to choose from, Lampard has a serious job on his hands keeping everyone happy. He is not in the least bit perturbed, though.

Chelsea are certainly well-placed, though, to deal with a punishing fixture list. They have a squad nearly every side in the Champions League and have now just reached the knockout stage with two games to spare, meaning they can rest games with the Premier League in mind.