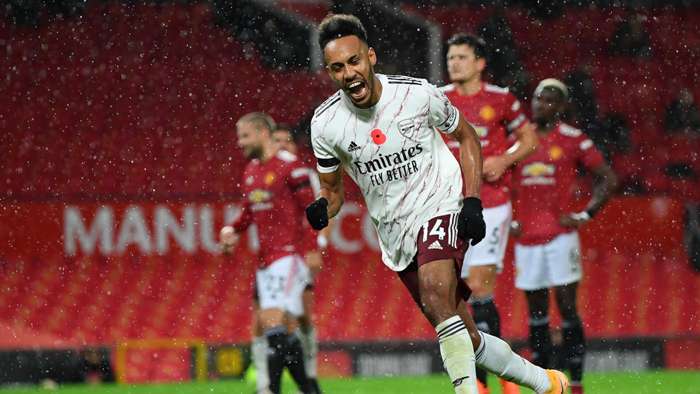 Arsenal have finally ended their long wait for a win at one of the other Premier League ‘big six’ sides, with Pierre-Emerick Aubameyang’s goal against Manchester United enough to break a duck that stretches back five years and 29 games.

Not only did it earn the Gunners a vital three points, but it also ended their unwanted record in away games against United, Manchester City, Chelsea, Liverpool andTottenham.

You have to go all the way back to 2015 for their last win on the road at one of those sides, with goals from Santi Cazorla and Olivier Giroud sealing a 2-0 win against Manchester City at the Etihad Stadium.

They have drawn 10 and lost 19 of their encounters with those sides since.

It was also their first victory at Old Trafford for 14 years, since Emmanuel Adebayorscored the winner in a 1-0 success in September 2006.

The victory moves Arsenal up to eighth in the Premier League, four points behind leaders Liverpool in what is becoming an increasingly congested top half of the table. It also ended a run of successive league defeats after 1-0 losses at home to Leicester and away at Manchester City in recent weeks.

There was also a little piece of history for Aubameyang, who became the first Gunners player to score a penalty for the club at Old Trafford in the Premier League. Previous spot kicks from Robin van Persie in 2011 and Gilberto Silva in 2006 were both missed.

It was another miserable afternoon for Manchester United, though, with the Red Devils languishing down in 15th after a third defeat from their opening six league matches of the season.