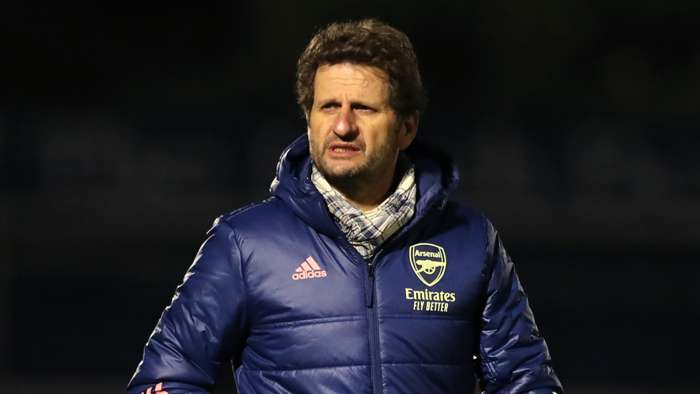 As Fran Kirby raced away from Lia Walti and slotted home on Wednesday night, it was damning in so many ways for Joe Montemurro’s Arsenal.

For one, it ended the Gunners' challenge for the Women's Super League title, opening up the gap between them and Emma Hayes' side to 12 points.

Secondly, it made their push for Women’s Champions League football all the more difficult.

Arsenal’s best chance of finishing in the top three now seems to be to beat Manchester United next month and hope that triggers Casey Stoney’s side to slip up in a number of other fixtures. It isboth unlikely and out of their hands.

Wednesday’s result also extended Arsenal’s winless record against Chelsea and Manchester City, their two main rivals over the last few years, to eight games. They have loston seven of those occasions.

Such a record means that fans are starting to ask whether Montemurro is the right coach to take Arsenal forward?

What has happened over the last 18 months does mean it is easy to forget what a revelation the Australianwas at the start of his tenure in north London.

Despite joining the club midway through the 2017-18 season, he ended the campaign with two trophies viathe Continental Cup and Women's FA Cup. A year later, he added a league title to the trophy cabinet, meaning he had won every domestic title in England in less than two years.

The fluidity of Arsenal’s attack and dynamism of the team has won plenty of plaudits outside of the club, but it isalso something that the players love too.

Defender Lotte Wubben-Moy, speaking to the Times, described Montemurro's approach as "the greatest style of play in the women's game".

Why havewe not seen that much this season? There are a number of reasons. One of the most significant has been injuries.

The sheer volume of problems that the Gunners’ medical staff have had to deal with has been so high that the club launched an internal investigation towards the end of last year.

But the issues continue. The day before Sunday’s defeat to City, the club revealed that they would be without captain Kim Little, vice-captain Jordan Nobbs and centre-back Jen Beattiedue to injuries suffered in training that week.

On Wednesday, Caitlin Foord, perhaps Arsenal’s best player this season, was out with a knee injury.

Going intotwo such crucial games having played just once in seven weeks was another problem for the Gunners, with postponements due to weather and Covid-19 cases preventing them from building fitness or momentum after the Christmas break.

You cannot put all of Arsenal’s struggles down to bad luck, though. Game management cost them in December’s defeat to Man City, with the Gunners on the brink of earning a point away to a team with an incredible home record, only to concede in the final seconds.

There have also been instances where team selection has surprised many.

A narrow, unorthodox set-up against Chelsea last year resulted in a 4-1 defeat that helped the Blues on their way to the 2019-20 title. After the game, Montemurro explained that the thinking behind it was to "create overloads in the middle of the park" andsaid his team's defeat was"tactical".

This season, their struggles in the big games seem to stem from the opposition pressing high. It disrupts Arsenal’s desire to control the game and unsettles them.

“I take full responsibility and I’m getting things wrong," Montemurro said on Wednesday of his team's record against their biggest rivals.

Should the Gunners fall short of a European place for a second successive season, it could be particularly damaging.

Vivianne Miedema, one of the best players in the world, has been widely linked with Lyon. The European champions are also interested in Leah Williamson, with the BBC reporting that Paris Saint-Germain and Wolfsburg are keeping tabs on the England defender too.

Montemurro admitted he was "quietly confident" Williamson would sign a new contract, but he indicated that she is notthe only player who has external eyes on her. "It's a great honour obviously that a lot of the big clubs are coming, not only for Leah, but for a lot of players," he said.

If a failure to be in Europe’s premier competition means Arsenal lose key players, that is a serious worry.

In what is a particularly complicated situation, there are questions that can be asked about the club as a whole too. While Chelsea and Man City have invested massively in their sides recently, can the Gunners claim to have done the same?

The pressure is always on the manager, though, and it is certainly heaping on Montemurro.

However, who out there would be able to change the fortunes of this team right now? Who is a realistic replacement that could do more than Montemurro, particularly mid-season?