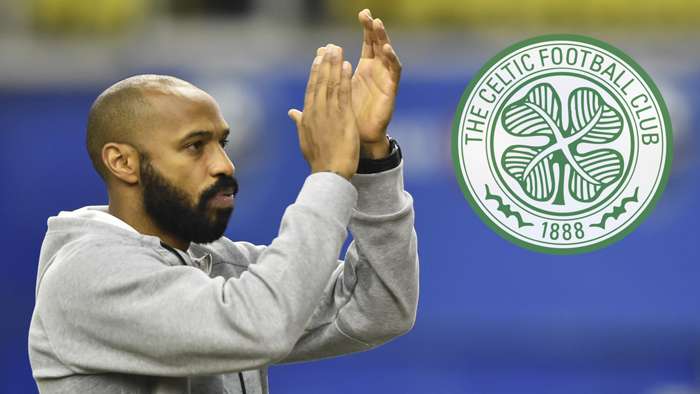 Thierry Henry has declared himself "available" while discussing links with the top job at Celtic.

The Scottish Premier League sideare currently on the lookout for a new permanent manager after Neil Lennon stepped down from his post in late February.

Henry has been out of work since leaving Montreal Impact around the same time and has now suggestedthat he would be open to joiningthe Glasgow giants.

“With all humility, whatever is going to come my way, I’m not saying that should come my way, but whatever comes my way Im going to evaluate," the legendary former Arsenal and France striker said on TheRobbie Fowler Podcast.

"All I know is I want to coach and be back out there. You look at what StevieG (Steven Gerrard)has done, and its just ridiculous. What a man. I knew he was going to deliver.

"What I like withRangersis they gave him time to build a team, to grab the players he wanted and make sure they were going to play.

"I love that they gave him the time to be able to catch Celtic, because if not, how are you going to do it? You need more than one season and two seasons.

"To go back to what you asked, I have massive respect for both clubs, but Im just trying to wait and see.

"I am available, and I dont know whats going to come my way but I want to coach for sure."

Celtic had been the dominant force in Scottish football prior to the 2020-21campaign, winning nine successive league titles.

However, in 2018 Gerrard set about knocking the Hoops off their perch after being appointed as head coach at Rangers, with the Liverpool legend going on to win their first top-flight domestic crown in a decade in March.

The Gers are 20 points ahead of Celtic in the table having yet to suffer a single league defeat, with their arch-rivals now in need of a significant rebuild to recover from a turbulent season.

The Hoops will be expected to close the gap onRangers next season with the help of some potential new additions in the summer, but whether or not the club will take a gamble on the relatively inexperienced Henry to lead the team remains to be seen.

Henrys first foray into coaching saw him take up the assistant managers role with the Belgium national team in 2016, and he sat in the dugout alongside Roberto Martinez during their run to the World Cup semi-finals two years later.

The 43-year-old was then offered the top jobat Monaco, another of his former clubs, but he was sacked after just three months with a record of five wins from 20 games.

Henry went on to experience a new challenge in MLS with Montreal Impact in November 2019, and managed to lead the club to the playoffs for the first time in four years before leaving for personal reasons earlier this year.

Why combustible Keane is a risk worth taking for Celtic