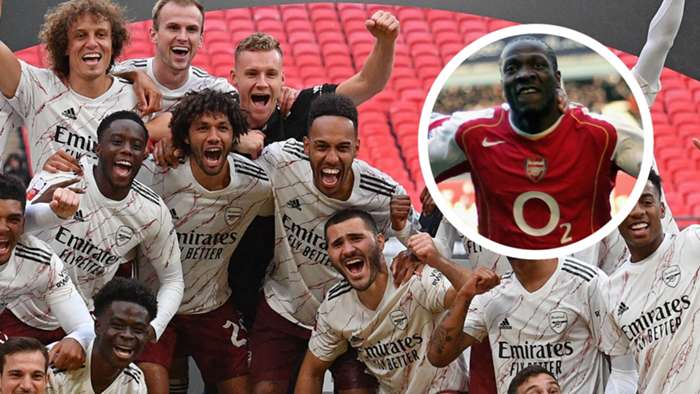 That triumph in 2004, sealed by Arsene Wenger’s Invincibles, is one that is steeped in history and one that, at times during the past decade, has felt like a distant memory.

But one of the men who was key to that success believes that the Gunners are now finally beginning to show signs of coming back to life under Mikel Arteta.

Winning the FA Cup in August was the start, but as Arteta’s side prepare for their Premier League opener at Fulham on Saturday, Arsenal legend Lauren believes that the ambitions at his former club should be even higher this season.

“The target is to fight for everything,” the two-time Premier League winner tells Goal in an exclusive interview.

The former Cameroon internationaladds: “So far Arteta has been brilliant. He managed to qualify the team for Europe, he won the FA Cup and the Community Shield against big teams. And you can see the style of play. This is what I love.

“Play from the back with a good passing game, dominate matches with possession and have a good transition at the end. This has always been Arsenal. This is the Arsenal way.”

Lauren won five major trophies during his seven-year stay in north London, which began in 2000 when he rejected a move to Real Madrid in favour of a switch to Highbury.

He played alongside some of the greatest players in the club’s history, including Thierry Henry, whose influence in terms of goals is now being mirrored by Pierre-Emerick Aubameyang.

The Gabon international will begin the 2020-21 campaign having scored 70 goals for Arsenal in just 109 games in all competitions.

He scored both goals in the FA Cup final success against Chelsea in August and was on target again as Liverpool were beaten in the Community Shield a fortnight ago.

Aubameyang has been in talks over a new contract at Arsenal for months, with an announcement over a new three-year deal expected imminently.

“It will be fantastic for the club,” said Lauren. “You can’t go to the market and find another striker who is going to score the same amount of goals.

“For the last three years he'sbeen the best player for Arsenal. So you must sign this guy.”

Despite now living in Seville, where he has be working towards earning his coaching badges, Lauren still watches Arsenal on a regular basis.

And the 43-year-old, who started out as a midfielder before being transformed into a right-back by Wenger, believes it is clear where things need to be improved if his former club are to compete for the game’s top honours once again.

“We need to balance the attacking players with the defence,” he says. “If we manage to balance that then Arsenal will be up there fighting to win the league.

“I hope Gabriel Magalhaes, with the help of the senior players who are already there, will help balance this position because you can’t win the league or be up there fighting with Liverpool and Manchester City without balancing the defence.

“If we do that, I’m convinced the team will be up there.”

Gabriel’s arrival from Lille, along with William Saliba’s availability this season following his loan spell with Saint Etienne, should certainly help Arsenal improve things defensively over the coming season.

But one area they are still looking to strengthen before the transfer window closes on October 6 is in central midfield, with Thomas Partey of Atletico Madrid a priority target.

The Ghana international is a player Lauren knows well and one the former Arsenal star believes he would make a big impact at the Emirates Stadium.

“He’s a top player,” he says. “He’s been improving under Diego Simeone.

“We’ve seen this guy since hisearly days with Mallorca, so he stepped up to a bigger club with Atletico Madrid and kept performing well, improving year after year.

“Before he was used as a holding midfielder. Now he can pass the ball, play with the striker, have shots from outside the box and even score important goals, as we sawlast year in the Champions League.

“If Arsenal decide to sign him, I think it will be a fantastic addition in the middle of the park.”

Arsenal’s hopes of getting a deal done for Partey during the next four weeks will hinge on whether they are able to move some players on to generate some much needed transfer funds.

One of those players could be Hector Bellerin, who is attracting interest from Champions League runners-up Paris Saint-Germain.

Arsenal are reluctant to part ways with their right-back, but with Ainsley Maitland-Niles and Cedric Soares also part ofthe squad, they do have cover for the Spain international.

“But you need all your players to do well and win things. You need a big squad, big injuries will come, sendings off will come, so you need to prepare and plan ahead.

“If you ask me personally, I would stick with what I said. You need the full squad to compete in four competitions. When you get to January, with injuries, the FA Cup and European competitions, you need to top players to face every competition.”

One player who looks certain to still be at the club after the transfer window is Mesut Ozil.

Arsenal are keen to get their highest earner off the wage bill, but he remains determined to see out the final year of his contractbefore leaving as a free agent in 2021.

The German did not feature at all during the final weeks of last season, with Arteta leaving him out of the squad altogether, but he is back in training and insists he is fit and ready to face Fulham at Craven Cottage.

When his contract ends next summerOzil will have been at Arsenal for eight years, and Lauren says he wants to see the former Real Madrid star end his time in north London by taking a leaf out of Aubameyang’s book.

“If you ask any Arsenal fan around the world, nobody will doubt Ozil’s quality,” saysthe former Gunners favourite.

“Maybe it’s a bit risky what I’m about to say now, but I would like to see the same mentality from Ozil as we see with Aubameyang, every single game and every single year.

“This is the big difference between him and Aubameyang. Aubameyang is the one you can see committing in every single game without thinking about himself. I would like to see Ozil in that way because he’s a top player.