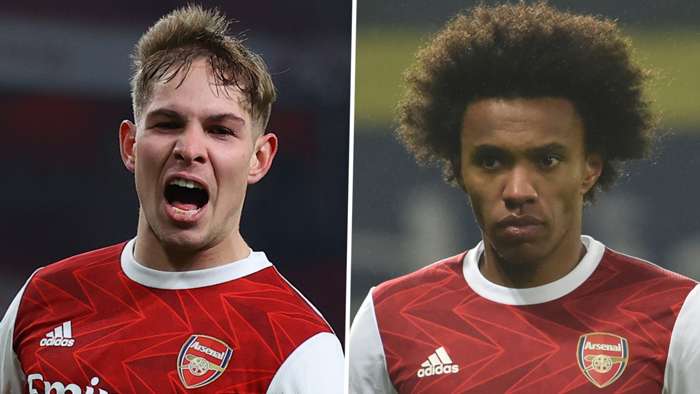 Less than a month ago, Emile Smith Rowe hadn’t started a league game in over a year.

Smith Rowe didn’t even start Saturday night’s FA Cup third-round tie against Newcastle, such is his importance to Arteta now, but he still came off the bench to inspire a 2-0 victory and earn himself the man of the match award.

After a goalless 90 minutes, the 20-year-old finally broke the deadlock in the second period of extra time with a fabulous finish before skipper Pierre-Emerick Aubameyang killed the game off with a late tap-in.

This wasn't a pretty win for Arsenal, but it was another performance which underlined how important the club’s youngsters are to Arteta going forward, and how tricky a problem some of the senior stars are becoming.

Having been left out of the starting XI, Smith Rowe and Bukayo Saka might have been a bit fearful that Willian or Nicolas Pepe would produce the type of performance which would have made them undroppable.

However, as has been the case time and time again this season, both flattered to deceive.

There were some bright spots from Pepe, especially in the first half when he threatened at times to prize open the Newcastle backline, but, on the whole, it was another underwhelming display from Arsenal’s record signing.

The Brazilian started in the No.10 role that Smith Rowe has made his own since Boxing Day and served up another horrendous display for the 66 minutes he was on the pitch.

Brought in on a free transfer from Chelsea, the 32-year-old was supposed to hit the ground running this season, given his experience and knowledge of the Premier League.

But he has done anything but and with every week that ticks bye, he is becoming more and more of a problem for Arsenal.

Willian stands to pocket close to £30 million ($40m) over his three-year contract in north London but, so far, he is offering nothing back in return.

His shot in the first half after Martin Dubravka had palmed out Aubameyang’s effort summed up his season so far. A player of his calibre should have at least got it on target; instead, he almost took out the clock at the top of the stadium.

Arteta has staunchly defended his summer signing up to this point but, privately, the Spaniard must be very concerned by his start to life in north London.

Arsenal have been trying to reduce their wage bill for years and, in the coming months, several high-earners will finally be on the way out.

But it now looks like they have lumbered themselves with another ageing player on big money who will be extremely difficult to shift.

Arsenal have invested well over £100m ($136m) to bring in Pepe and Willian over the past two years. Both are senior players who are expected to deliver, but instead they find themselves behind two academy graduates in the pecking order.

Both Saka and Smith Rowe were introduced in the second half to try and spark some life into an Arsenal display that had all the hallmarks of their lethargic performances during their recent dire run.

And they did just that, causing Newcastle all sorts of problems with their movement and intent whenever they got on the ball.

Smith Rowe was rightly reprieved by VAR when he was initially shown a red card for a tackle on Sean Longstaff just before the end of normal time and he went on to take full advantage in the extra 30 minutes.

His touch and finish after he latched on to Alexandre Lacazette’s flick-on was a real indicator of his quality, and Arteta will be counting his blessings that he has the young attacker to call on for the next three games, rather than having him sat at home.

The enthusiasm and quality he has injected into Arsenal’s season since Christmas is remarkable and it makes a mockery of the abject performances Willian continues to serve up on a weekly basis.