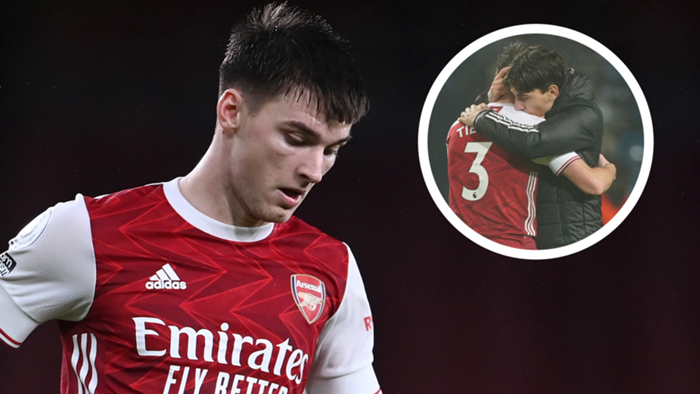 Kieran Tierney has revealed the impact Hector Bellerin has had on his short Arsenal career so far, saying he would never have been able to settle so well without the invaluable guidance of his Spanish team-mate.

It would be a further two months before he eventually made his Gunners debut, and the 23-year-old spent that time working on his rehabilitation alongside Bellerin, who was coming back from the cruciate ligament injury he had suffered against Chelsea in January 2019.

And, speaking in 'Unseen Journey'- a documentary which charts Bellerin’s near year-long recovery from his injury - Tierney details the bond he has formed with Arsenal’s vice-captain and the impact he has had on him since he made his move to north London.

“The way I got so close to Hector was on my first day, he came up and introduced himself,” recalled Tierney. “He said he would be spending a lot of time with me because he was injured and I was injured.

“So straight away I felt a good connection and I knew how big a name he was as well, so coming into a changing room with big names, for him to do that was so nice and it helped me settle in straight away.

“I used to say to my family, 'Hector’s helping me, Hector’s taking me out today, Hector’s doing this'. I think they even appreciate how much he helped me.

“The biggest influence in the team for me would be him. He helped me the most.

“I wouldn’t have been as comfortable at Arsenal or in London without him. He helped me from day one. I can’t thank him enough for that.”

Having spent his entire career at his beloved Celtic, the decision to leave his hometown club to join Arsenal was not an easy one to make for Tierney.

Initially, he struggled to settle in London and was plagued by self doubts, but his friendship with Bellerin - and the guidance he received from the right-back - soon helped calm the nerves.

“I think he could see when I came that I was pretty nervous,” said the Scotland international. “I had the young boy look about me.

“You don’t have much time to settle in at Arsenal. You are playing with big players and big names, so you have to hit the ground running.

“I remember that I probably overthought every mistake I made. I went home and was like, 'I could have done better, I could have done this'. Whereas I wish I had just relaxed a little bit more and enjoyed it.

“And that was the time Hector said to me, 'you’re good enough to play here, just believe in yourself'.”

Tierney added: “That helped me so much. Just that little talk. It was after training in the changing room. Me and him had just done a gym session and after it we sat down for an hour and spoke. I think that changed everything.

“I went home that night feeling much better about myself. I remember texting him saying thanks so much for that chat, it helped me so much.

“I went in the next day with a different mindset, a different confidence and it was a big part to do with Hector.”

Tierney eventually made his debut for Arsenal in a 5-0 Carabao Cup win against Nottingham Forest on September 24, 2019 - more than six weeks after arriving from Celtic.

It proved to bethe same night that Bellerin made his own return to first-team action.

“I look back at that as one of the better night of the last few years,” said Tierney. “I’d been out the best part of a season struggling with my groin injury. It was like the most horrible time of my life.

“Coming to a new club I had a lot of expectation on me and little time to do it. The physios were brilliant, they never rushed anything and when I did eventually get back me and Hector made our comebacks on the same night. It was a great night for everyone.