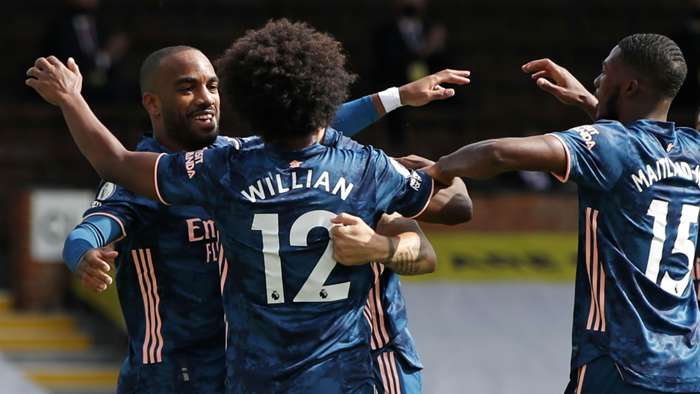 Alexandre Lacazette made Premier League history when finding the target for Arsenal against Fulham, with the French striker having become the first man to record the first goal of an English top-flight campaign on two occasions.

The Gunners opened their 2020-21 season with a derby date against London foes at Craven Cottage.

Mikel Arteta’s side offered plenty of cause for optimism in 2019-20, as they savoured FA Cup success.

They were back on the trophy trail when edging out defending champions Liverpool in the Community Shield at Wembley.

The feel-good factor generated by those triumphs has rolled over into the new campaign.

Arsenal needed less than nine minutes to find the target against Fulham, with Lacazette the man to get them up and running.

Some questionable defending by the Cottagers saw the ball ricochet around their penalty area before falling at the feet of a proven finisher.

Lacazette snapped up his chance, with the France international turning home from close range.

That effort was the first of the 2020-21 season, but not the first time that thehard-working Gunners frontman has been quickest out of the blocks.

Back in 2017-18, Lacazette also opened the scoring in a meeting with Leicester.

No other player can claimto have achieved that feat on two occasions, with an early entry to the record books added in the first round of fixtures of a new term.

Arsenal will be hoping that there are many more efforts to come from Lacazette.

He has seen a move away from Emirates Stadium mooted, with it suggested that he could be used as a makeweight in the Gunners’ efforts to prise Thomas Partey from Atletico Madrid.

The 29-year-old is, however, under contract in north London until 2022 and has no desire to take on a new challenge.

He has told L’Equipe: “I’m at Arsenal. I signed a five-year contract to improve and win titles. I’ve got two years left and I’m determined to stay.”