Arteta confident Arsenal will achieve all their transfer goals before deadline 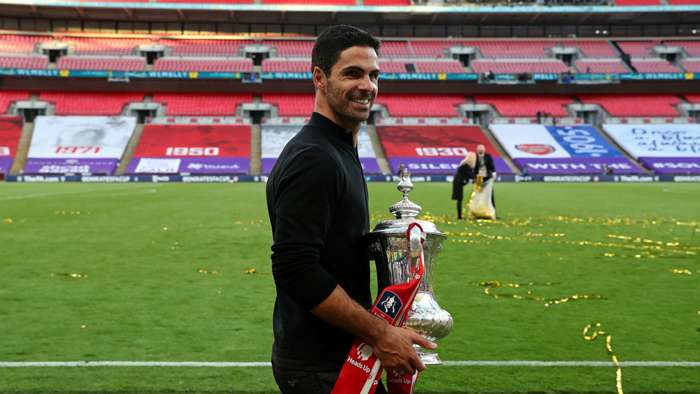 Arsenal always looked likely to be busy in the transfer market following that disappointment, as they look to rebuild under Arteta, who replaced Unai Emery late last year.

Defence appeared to be the area of the squad in most need of refreshment and the club made the loan spells of Pablo Mari and Cedric Soares – both of whohardly featured after their January arrivals due to injuries – permanent before the season ended.

William Saliba has joined up with them after spending 2019-20 on loan at previous club Saint-Etienne, Willian signed on a free transfer from Chelsea and Gabriel Magalhaes is expected to complete a move from Lille.

Dani Ceballos, Houssem Aouar and Thomas Partey remain potential arrivals in midfield, and Arteta is optimistic Arsenal will complete all the deals they had set out to do.

"I'm confident we're going to do everything we can together to achieve the target we had for before October 6," Arteta told reporters ahead of Saturday's Community Shield clash with Liverpool.

"If we are not able to do that it's because we couldn't reach that level or somebody beat us with our planning. It's very clear what we want to do, we are aiming for that and hopefully we can achieve it or get really close to achieving it."

Saturday's match sees Arsenal's 2020-21 season commence less than a month after 2019-20 concluded with their 2-1 FA Cup final triumph over Chelsea.

However any momentum gained against Liverpool will likely disappearagain very quickly as players disperse for international duty next week, with the Premier League set to start on September 12.

Arteta acknowledges the situation is far from ideal, but he accepts there has to be some compromise on the part of clubs given many national teams were denied tournament action in June and July because of the coronavirus pandemic.

"I think all managers wanted more time to have with them to prepare. Having that short period of time in pre-season and having to spend them back on international duty," he said.

"But as well, we have to understand that all the countries had the Euros taken away, which was a massive thing for them, and they've been waiting for many months to have their players back in.