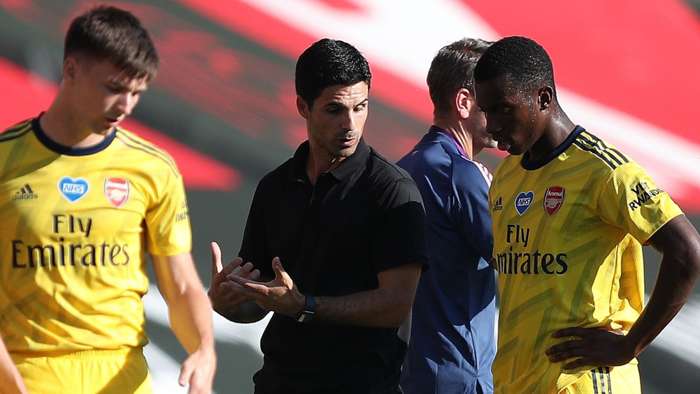 Eddie Nketiah says Mikel Arteta "has taught me a lot" and that young players "can definitely improve" under the "personable" Arsenal boss.

Nketiah has been among a number of young players to have benefited from Arteta's arrival at Emirates Stadium last December.

The 21-year-old was called back from a loan spell at Leeds United in January, before being asked to step up to the first team alongside the likes ofBukayo Saka and Reiss Nelson.

He went onto score four goals in 17 appearances for the Gunners at the back end of the 2019-20 campaign, and impressed with his dynamic style of play in the final third of the pitch.

Nketiah has not yet been able tomove ahead of either Pierre Emerick-Aubameyang or Alexandre Lacazette in the squad pecking order, but looks set for a bright future in north London if he continues on his current trajectory.

The England U21 international, who is expected to captainhis country for the first time in a European Championships qualifier againstKosovo on Friday, has credited Arteta for fast-tracking his development over the past nine months.

Nketiah also praised the Spanish tactician for his thoughtful approach to management and willingness to give extra guidance to the club's next generation of talent.

"Mikel has taught me a lot," said the Arsenal starlet. "He is definitely very personable. He does a lot of tactical work about understanding your role.

"As a player, it's great to see the manager going into such detail — it shows how much he cares.

"As a young player, if you have the right mentality, you can definitely improve under him and that's something I'm trying to do.

"He's helped my all-round game, given me chances to express myself, make mistakes and try to correct them. I'm learning on the job."

Nketiah will also bein action for Aidy Boothroyd's U21s away againstAustria on Tuesday, before his focus shifts to the start of the new Premier League season.