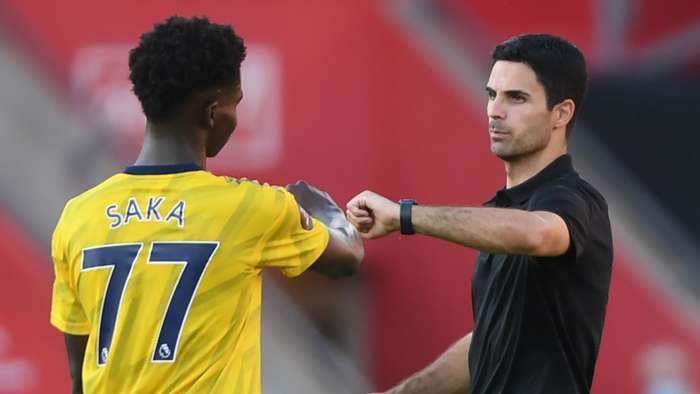 Mikel Arteta has called on Bukayo Saka to continue pushing himself after the youngster scored his maiden Premier League goal for Arsenal in a 2-0 win over Wolves.

The 18-year-old's goal caps a week in which he signed a new contract with the Gunners, and though Arteta has urged the winger to improve his game, he has been greatly impressed by Saka's attitude.

"He has a lot of things to improve, that'smy message," Arteta told Arsenal Digital. "He struggled in some moments in the game today in the first half.

"I played him in a different position because I believe that he could hurt the opponent in there and he scored a really good goal.

"But what I like is that when things weren’t going for him, how he reacted and the personality to try and get the ball and fight for every ball and keep trying. He got rewarded."

At the other end of the pitch, Arsenal's defence – which has looked shaky all season – kept Wolves at bay, much to the delight of Arteta, who deployed a back three with wing-backs.

"I'm very pleased," he said. "They’re playing in a little bit different positions from what they are used to and it's a formation that we haven't used much or trained much, but the effort and attention and everything they are trying to do, that's when it brings the focus and then the results.

"It's a long process but the hardest thing is that continuity all the time and that we don't come back to where we were and go back to bad habits. If we do that then we will compete every game."

Arsenal now sit seventh in the Premier League, eight points shy of fourth-place Chelsea, with Arteta's side next in action against Leicester City on Tuesday.