Arteta singles out Guardiola after 'best moment' of his career 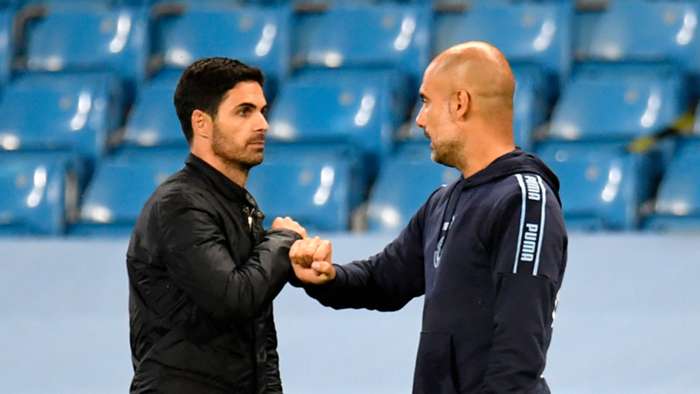 Mikel Arteta thanked Manchester City boss Pep Guardiola after Arsenal beat Chelsea 2-1 in the FA Cup final to give the head coach what he described as the best moment of his career.

The 38-year-oldhas enjoyed a successful first campaign at Arsenal, culminating in Saturday's win at Wembley to take their record tally of triumphs in the famous competition to 14.

And Arteta, who becomes the first Arsenal boss to win a major trophy in his first season in charge since George Graham in 1986-87, was quick to laud Guardiola.

"He has been a key figure in my development as a coach," he said at his post-match news conference.

"He has my gratitude. I wouldn't be sitting here today without him. I have to thank him big time."

The Spaniard, who said after the match he is optimistic Aubameyang will sign a contract extension, praised the club captain for another match-winning display.

"Big games require big moments for big players - he did that in the semi-final and now today," he said.

"People questioning whether he can do it in big games and he's done it today."

Arsenal finished eighth in the Premier League - their lowest position since 1994-95 - but have earned a place in next season's Europa League thanks to their win over Chelsea.

Arteta is pleased with the steps his players have taken in his first eight months at the helm and is hopeful that his side can build on their latest domestic cup success.

"I think this is the best moment of my career because I know the difficulties we've been through," he said.

"I had one mission - make the players and staff believe that we could do it. Seeing the change in the dressing room is what makes me more proud.

"I completely understood the needs of this football club. I knew the challenges I was facing when I made a decision to come here and the expectations we will always have.

"This is the first one. Let's enjoy it today. My players have been fantastic and the staff and everyone upstairs."

Arteta, who only ended his playing career with Arsenal in 2016, added: "I could write a book on my time here. Everyday has presented something different.

"I'm very lucky the people I have around me for every decision I had to make. Until you are sitting in this seat, you don't know the responsibility you have to make.