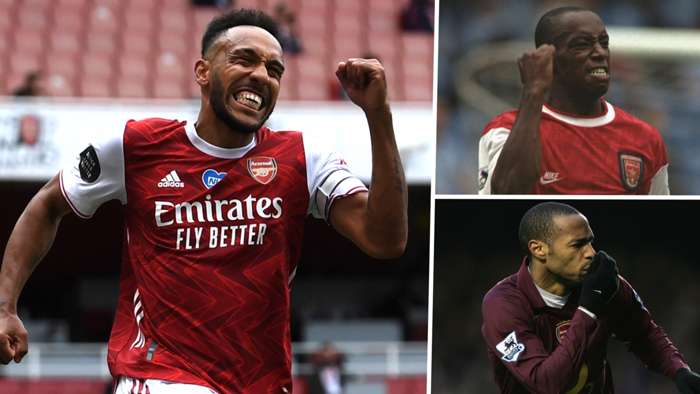 Pierre-Emerick Aubameyang will struggle to chase down Thierry Henry and Ian Wright in the goal stakes at Arsenal but a man with a new contract to his name can still cement a reputation as a Gunners legend, says Martin Keown.

Aubameyang has extended his association with Arsenal through to 2023,with the Gabonese striker now free to focus on his football and enhancing a record that is already mightily impressive.

The 31-year-old has found the target on 72 occasions through just 111 appearances for the Gunners, with his strike rate helping to land FA Cup and Community Shield honours.

There is every reason to believe that there will be many more efforts to come, with the achievements of some iconic figures there to chase down.

Aubameyang will find it tough to get near Wright (185 goals) and Henry (228 goals) at the top of the Arsenal scoring charts, but Keown expects him to go down in history as an Arsenal great.

The former Gunners defender told talkSPORT: “Aubameyang loves playing there and he wants to be a legend in the future, so why not?

“He’s 31 years of age and he’s turned down Barcelona by the way to stay there. I think that tells you how much he loves the football club and what he’s looking to achieve.

“If they win the Premier League in the next three years then he certainly will become a legend if he plays a major part in that.

“You look at the goals record that he’s got and he can’t get near Thierry Henry and I’m not even sure he can catch Ian Wright.

“But he wants to follow in their footsteps. I saw a piece withIan Wrightjust a few days ago and he came across very humble during that exchange. He comes across a very genuine character to me.

“He feels that way and it does come out in the way he plays. He takes responsibility and has no fear in front of goal.

“He loves it, so why would he want to go somewhere else?”

Keown added, with Aubameyang having shunned interest from Barcelona in order to remain at the Emirates: “Who’s to suggest he can’t fulfil his dreams playing under Arteta?

“Would you really have thought that Arsenal could have won the FA Cup at the end of last season?

“Would you really have believed theycould have beat Man City, Chelsea and Liverpool in as many weeks? And then there’s the way they’ve started this season.

“He’s convinced by Arteta and I think that’s the really good news, first of all for the Arsenal fans who have got a manager who is making things happen and turning that football club around.