Back with a bang! Jesus shows Man City what they've been missing ahead of Liverpool showdown 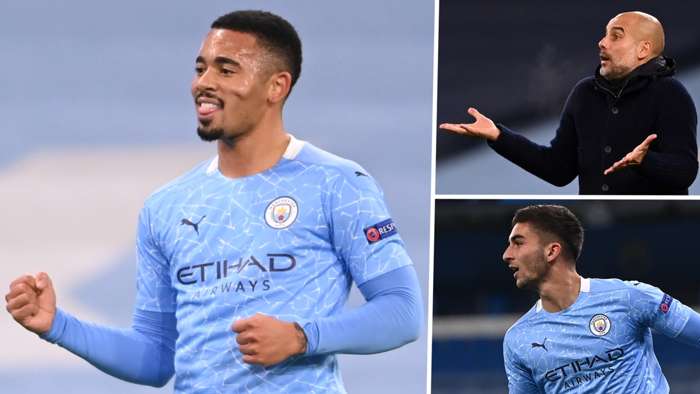 Gabriel Jesus took 12 minutes to remind Manchester City what they have been missing.

The Argentine has an outside chance of being on the bench for Sunday's huge Premier League clash with Liverpool, but Jesus showedhe is ready to go after coming back with a bang in the 3-0 victory over Olympiacos on Tuesday night.

Leading through a first-half strike from emergency striker Ferran Torres, City struggled to finish off the Greek champions, who had chances to sneak an unlikely point at the Etihad Stadium.

However, Jesus put the outcome beyond all doubt by showing the killer instinct that City have been sorely lacking of late. He came on in the 69th minute and ended the contest in the 81st before Joao Cancelo added some gloss to the final scoreline.

Picking up a ball from Kevin De Bruyne, the Brazilian drove at the Olympiacos defence, threw in a dummy before smashing home a fierce strike from a tight angle that was too powerful for Jose Sa.

Torres has proved a lively understudy in the absence of Aguero and Jesus but Guardiola wants his big guns back for this weekend's clash of England's titans.

The Spaniard had neatly tucked away a 12th-minute opportunity, after being played in by De Bruyne, for his third goal in three Champions League appearances this season. Unusually for the Belgian, the assist wasn't perfect but Torres' control was sublime and his nutmegged finish wasn't bad either.

Including his goal in Valencia's exit to Atalanta last season, the 20-year-old Spain international has now scored in four consecutive Champions League appearances.

He could have had more, too. A brilliant early flick almost sneaked in at the near post while another close-range header drifted wide.

Still, Torres was bought as a winger and Jesus showed the kind of predatory skills that City will need against reigning Premier League champions.

Indeed, it is worth noting that Guardiola's usually free-scoring side have netted just nine times in their opening six matches. Jesus' timely return should certainly help on that front.

At the back, meanwhile, Guardiola had the luxury of being able to rest Ruben Dias and Aymeric Laporte.

The two centre-backs have formed what already looks like a formidable partnership, so it is a huge boost for City that they will be fresh for the visit of the English champions.

Certainly, City will need both men at their best on the evidence of Liverpool's stunning 5-0 victory at Atalanta.

Guardiola has insisted that his squad were undercooked going into the season, after a one-week preseason on the back of a short summer break.

However, like Jurgen Klopp's Liverpool, they are slowly going through the gears as they strive to get back to their best.

The Premier League table might not reflect it yet, but Sunday's huge game will undoubtedly be between the two strongest teams in England.