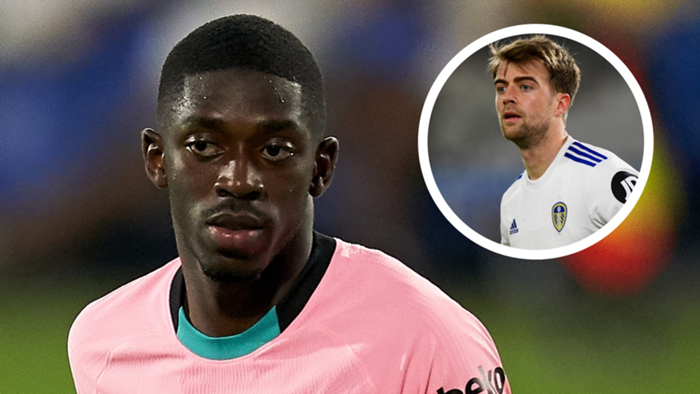 Barcelona forward Ousmane Dembele is a "massive fan" of Leeds United who watches every match, according to Patrick Bamford.

The Leeds striker says that goalkeeperIllan Meslierasked for his jersey after a Premier League fixture in order to pass it on to his France U21 team-mate Dembele, who he says is a supporter of the west Yorkshire outfit.

Dembele is currently starring in Spain for the Liga giants, but, according to Bamford, he has one eye on the action in England and has grown to support the Elland Road side.

The striker told the Leeds United club podcast:"After the Fulham game he [Meslier] was like: I need your shirt please. I said: Yeah, its fine. Who for? He said: Ah, Dembele.I said: Wait, who?He said: The guy from Barcelona.

"I was like: What, he wants my shirt?and he was like ‘yeah, he wants yours and Kalvin [Phillips]’s shirts because he’s a massive fan of Leeds and watches every game’.

“I was like ‘you serious?’ And I said: Okay, but you’ve got to get me his shirt then in return. So, he FaceTimed me at midnight the other day and showed me this Barcelona shirt that says: To my bro Bamford, from Dembele."

Bamford has been something of a revelation in the Premier League in the 2020-21 season, with the Leeds forward having scored 14 goals in 29 league appearances.

Indeed, he has finally found consistency in Englands top flight having had disappointing stints with Crystal Palace, Burnley and Middlesbrough.

The 27-year-olds form has seen him come into contention for England as well, although he failed to make the squad for the start of the 2022 World Cup qualifiers, with Gareth Southgate opting for Ollie Watkins instead.

Dembele, meanwhile, has faced his fair share of criticism and injury woe since he joined Barcelona from Dortmund in a mega-money deal back in 2017.

He has, however, found the net on nine occasions in all competitions this season and has been a key part of his sides improvement in recent months, with Ronald Koemans side still in with a chance of claiming La Liga title glory.