Barca games without fans will be very strange - Griezmann 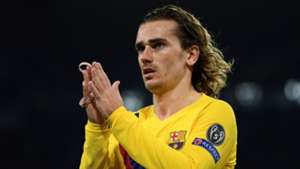 Barcelona forward Antoine Griezmann admitted it would be "very strange" to play behind closed doors.

The La Liga leaders will resume their season with a trip to Mallorca on June 13 amid the coronavirus pandemic, which led to the campaign being suspended in March.

Griezmann said there was no doubt it would be unusual to play with no fans in attendance due to Covid-19.

"The first game will be in Mallorca, but it will be very strange to play without an audience," he said during a conversation on Twitch on Thursday. "It will be the first time I have experienced something like this."

Griezmann, who has scored 14 goals in 37 games this season, said he made the most of family time during the suspension of the campaign.

"I had never been so long stopped," he said. "Yes, it is true that during these days I was able to enjoy my children."

Since arriving from Atletico Madrid, the France international has come under some criticism for his performances but Barcelona legend Andres Iniesta has backed him to step up.

"Griezmann and the rest of the new players that arrive every year need time," Iniesta told Marca.

"They have enormous talent and will definitely end up triumphing and making a place for themselves in this team where it is not easy to play."

"There are growing rumours about a potential Antoine Griezmann transfer to Internazionale in exchange for Lautaro Martinez or even a deal that could see the Frenchman go to PSG and Neymar come the other way," Rivaldo wrote for Betfair.

"But I believe that Barca's board will give Griezmann more time to make an impression at the club.

"In Italy, Griezmann would have more difficulties and I think his future is in La Liga where he is well-adapted and ready to show his best game regularly.

"Barcelona just needs to be a little more patient before he builds more confidence and starts playing with more personality."