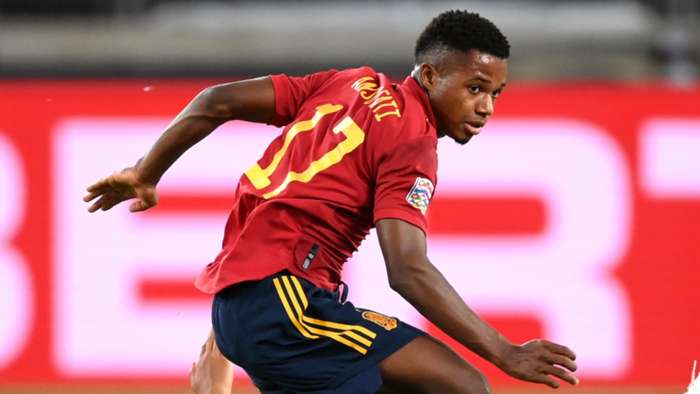 Barcelona's teenage star Ansu Fati became Spain's youngest debutant since 1936 when he took the pitch against Germany on Thursday.

Fati, 17, was one of the few bright spots in a Barca season marred by poor results on the pitch - which led to the club finishing the campaign without a single trophy -and instability away from Camp Nou.

The youngster made his debut at just16 years and 298 days on August 25, 2019 against Betis, and went on to make 33 appearances in all competitions in his maiden season, scoring eight goals.

He was subsequently called up to Luis Enrique's squad for the latest international window, the first since the coronavirus pandemic caused much of European football to close back in March.

And with Spain tied0-0 in their UEFA Nations League clash against Germany, Fati was thrown into the action after half time to help sharpen theRoja's attack.

The forward is aged 17 years and 308 days, making him the second-youngest footballer ever to play for Spain in the nation's history.

Fati additionally became the 800th full Spain international as he replaced veteran Jesus Navas at the break, as well as the first Roja member to have been born in Guinea-Bissau.

Not since Angel Zubieta had La Roja fielded such a young player at senior level.

Zubieta, who played much of his career in Argentina for San Lorenzo after fleeing his native Bilbao during the Spanish Civil War, debuted at 17 years and 284 days against Czechoslovakia in April 1936, the first of just two appearances he made for Spain prior to the outbreak of the conflict.

The podium is completed by another player with Barca ties; Bojan Krkic, who in 2008 made his international debut aged 18 years and 13 days.

Fati was unable to save his country from Nations League defeat, as Germany struck through Timo Werner in the second half to take a 1-0 victory.