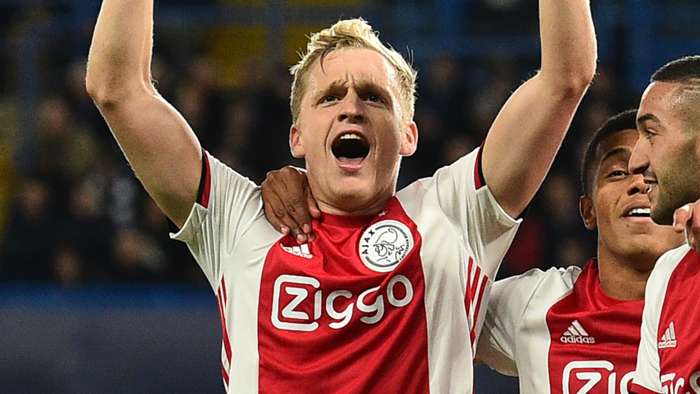 Ajax are bracing themselves for the sale of Donny van de Beek, with Erik ten Hag admitting there have been “some developments” around a midfielder who has been linked with Manchester United and Barcelona.

Leading sides across Europe often look to Amsterdam in their efforts to cherry pick the best options on the market.

Recent windows have seen the likes of Matthijs de Ligt and Frenkie de Jong leave Ajax, while Hakim Ziyech agreed a switch to Chelsea at the start of the summer.

Van de Beek was always expected to be next to make his way towards the exits, with his star having been on the rise for some time.

Old Trafford and Camp Nou have been mooted as potential landing spots for the 23-year-old.

Ajax are ready to bow to pressure when it comes to parting with another prized asset, but they will not be sanctioning any sales on the cheap.

It has been suggested that the Eredivisie outfit will demand around €55 million (£49m/$65m) from any deal involving Van de Beek.

Ten Hag has given nothing away when it comes to possible price tags for the Netherlands international, but has conceded that a move towards the exits is being made.

The Ajax boss told Ziggo Sport when asked for a transfer update ahead of a friendly date with Eintracht Frankfurt: “There have been some developments that made us decide us to keep him out of today's squad.

“We will see what happens. We'll make an announcement as soon as there's some clarity.”

He has been part of their first-team set-up since the 2015-16 campaign and taken in 175 appearances across all competitions.

The highly-rated playmaker has registered 41 goals through those outings, with double figures reached in terms of that end product in each of the last three seasons.