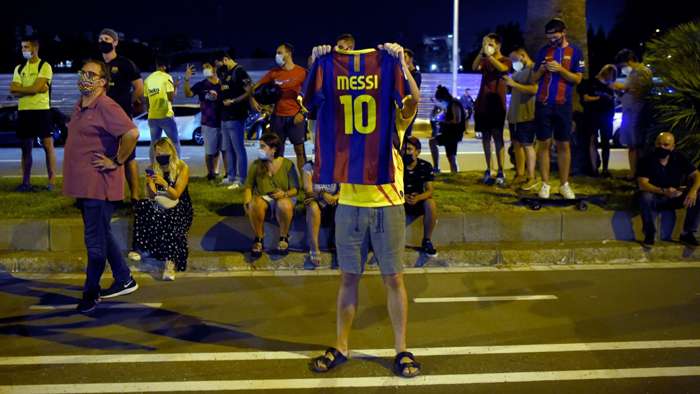 Barcelona fans have gone to the Camp Nou to voice their displeasure over the uncertain future of Lionel Messi.

The news comes in the wake of Barcelona's embarrassing 8-2 drubbing at the hands of Bayern Munich that sent them out of the Champions League. That loss led to the dismissal of manager Quique Setien, with Ronald Koeman brought in as his replacement, while sporting director Eric Abidal was also sacked in the wake of the defeat.

President Josep Maria Bartomeu, meanwhile, has decided to stay on through to at least the election in March, statingthat he believes Barca's issues are of a sporting nature.

Although his contract is setto expire at the end of the 2020-21 season, Messi and his legal team believethat a clause in his contract will allow him to terminate his deal.

However, he could be in for a fight as Barca will no doubt be desperateto hold on to their star man.

As the news began to emerge that Messi wished to leave, fans marched to the club's home stadium to voice their frustration with the club for their role in his decision.

With an emergency board meeting in progress inside, fans gathered while chanting"Messi stay" and "Bartomeu resign".

Barcelona fans have gathered outside Camp Nou and are chanting "Bartomeu out!" ????pic.twitter.com/krYQ1Ctz6f

Barcelona team-mate Luis Suarez and former team-mate Carles Puyol were among those to tweet their support for Messi, only adding more legitimacy to the fact that he could be leaving the club.

FormerBarcelonapresident Joan Gaspart, meanwhile,believes that Messi will be unable to leave the club for free this summer, despite the player's wishes, adding that him leaving would be even more embarrassing than the loss to Bayern.

Another former president, Joan Laport, called on Bartomeu to resign as he demanded the club do whatever it takes to keep Messi in Barcelona.

"Bartomeu and his Board must resign immediately," Laport said on Twitter."They have been undermining the morale of Messi to save themselves from the economic and sporting turmoil they have created. If they resigned there would still be hope that Messi would stay at Barca."