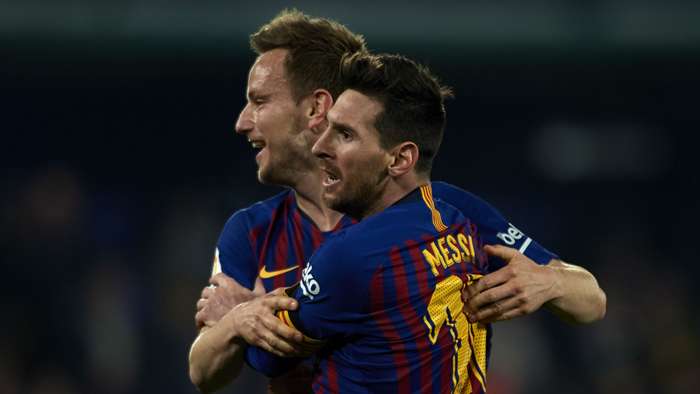 Ivan Rakitic insists Barcelona remain "the best option for all players" but admits he does not know whether Lionel Messi will leave the club.

Rakitic this week agreed a return to Sevilla from Barca for an initial fee of just €1.5 million,signing a four-year deal with Julen Lopetegui's side.

His departure has been overshadowed by the news that Messi also wants to leave Camp Nou, having told the club as much last week.

His father and agent, Jorge Messi, was to meet with president Josep Maria Bartomeu on Wednesday to try to reach an agreement over an amicable exit.

Rakitic says it is down to each player to decide their future but suggested the six-time Ballon d'Or winner could in fact be better suited by staying.

"The first option and the best option for all players is always Barca," he told reporters."Then, each player has to make their decision.

"For me, the first option would always be to be at Barca.

"Every player has to do his own analysis and I believed it was my moment. What Messi and other players are going to do, I don't know, you'd have to ask them.

"I've spoken with the board and we're all satisfied. And I'm convinced that everyone will make their own analysis and do the best for all parties.

"I respect the decision of every player and I've already said that these are decisions everyone has to make."

Messi informed the club he wanted to leave in the wake of Barca's humiliating 8-2 Champions League quarter-final defeat to Bayern Munich.

The Catalan giants ended 2019-20 without a major trophy, having endured a marked decline in standards since Rakitic's first season in 2014-15, when they won the treble under Luis Enrique.

However, Rakitic does not believe it is necessarily the end of an era of success at the club.

"I've not said anything about the end of a cycle, only that I always analyse everything and the situation has arrived to start thinking in another way," he said.

"It's not the end of an era. After six years, it wasn't easy for me to leave. I'm really grateful for every detail.