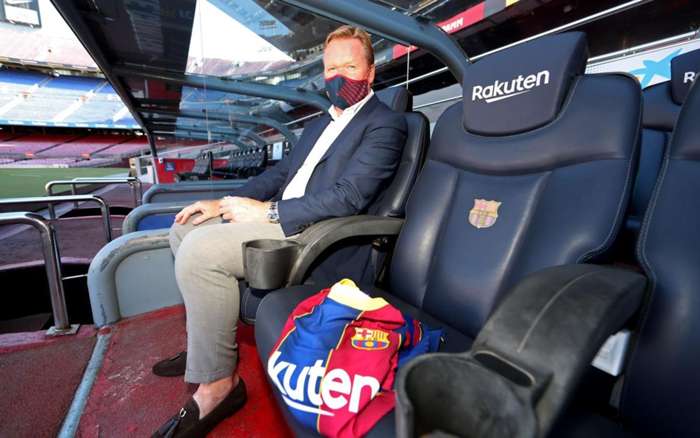 Ronaldo Koeman has said that "Barcelona is my home" while admitting to feeling "very lucky" after landing the top job at Camp Nou.

Koeman stepped down from his role in charge of the Netherlands national team to return to Barca last week, replacing Quique Setien in the dugout following the Spaniard's sacking.

The 57-year-old won four La Liga titles and the European Cupwith Barcelona at the height of his playing career, and served as an assistant coach at Camp Nou between 1998 and 2000.

He has been charged with the unenviable task of a major squad rebuild at Barca, who suffered a humiliating Champions League exit at the hands of this season's winners Bayern Munich on August 14.

Koeman is grateful to have been given the opportunity to lead the club closest to his heart, and says that he'sfortunate to be in such a position despite the current state of affairs on and off the pitch.

"I feel Barcelona is my home. In the previous visits to the city, I was missing something because I had not come to work for FC Barcelona," the Dutchman told Barca TV.

"Now I am the coach and I am very happy. The most important thing is to know, whether you are a coach, player or Barcaemployee, you are in the best club in the world and nothing can be better. We are very lucky to be part of this club "

One of the main issues for Koeman to address at Barca as his tenure gets underway is the future of six-time Ballon d'Or winner Lionel Messi. The Argentine has been heavily linked with a move away from Camp Nou in the wake of the club's first trophyless season since 2007-08.

Messi is reportedly unhappy with how Barca is being run at boardroom level, and the likes of Manchester City, Inter and Paris Saint-Germain have all been tipped to try and lure him away from Spain.

However, Koeman has already expressed his hope that the 33-year-old will stay put, and he is certain that the diminutive playmaker still has plenty to offer as he approaches the twilight years of his illustrious career.

“It is a pleasure to have a player like Messi in the team. With his quality, he will find space in the evolution of the team," said the new Barca head coach.

Koeman went on to assess Frenkie de Jong's first season at Camp Nou, with a man that he coached while in charge of the Netherlands considered to still haveplenty of potential to unlock.

"He is a very young player. The performance he has shown so far is very good," he said of the 23-year-old."And it is not an easy undertaking for a young player who comes to Barca. He is a player of the future for FC Barcelona"