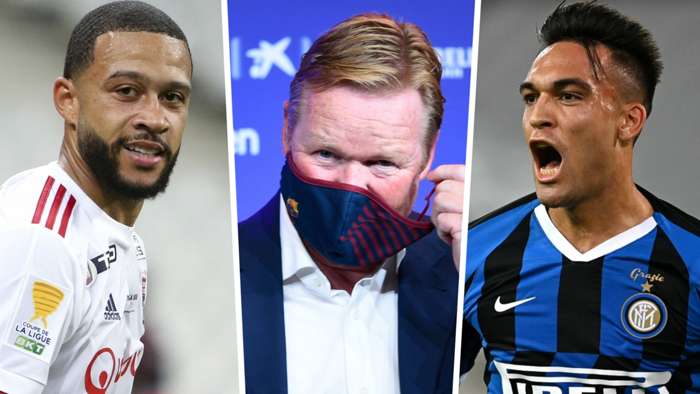 Barcelona coach Ronald Koeman has said that “nothing is ruled out” when it comes to the potential signings of Inter's Lautaro Martinez and Lyon forward Memphis Depay.

Little movement has been made on that front thus far, however, with 30-year-old Miralem Pjanic the only high-profile name to have been added to the ranks to date as the significantly younger Arthur Melo headed in the opposite direction to Juventus.

An agreement has been reached with Ajax full-back Sergino Dest but nothing has been finalised so far, while the club are still to find a suitable replacement for Suarez, who has joined Atletico Madrid, at the head of attack.

It is understood that Barca have all but given up on signing first-choice target Lautaro due to his hefty buyout clause, while second-choice target Memphis – who would cost far less – also remains out of reach for the Catalans, if Lyon's statements are anything to go by.

Koeman, however, is leaving the door open for all possibilities, telling a press conference on Saturday: “Nothing is ruled out. We are always looking for players to improve our game.

“It may be that the players you want aren't possible because of the financial situation of the club, but I've accepted this – I knew it before I arrived.”

The 57-year-old went on to turn attention to the players he already has at his disposal, adding: “It is always more important to talk about the players who are here, not the ones who are missing. More players might come, but we must focus on the ones we have.

“We are ready for the start of a complicated La Liga campaign. It will be very hard but for now we'll just see what happens to the players.

“We have many quality players in attack; Ousmane Dembele, Ansu Fati … If the squad stays like this we will have to accept it. We need all the forwards we have, we have a lot of top quality people.