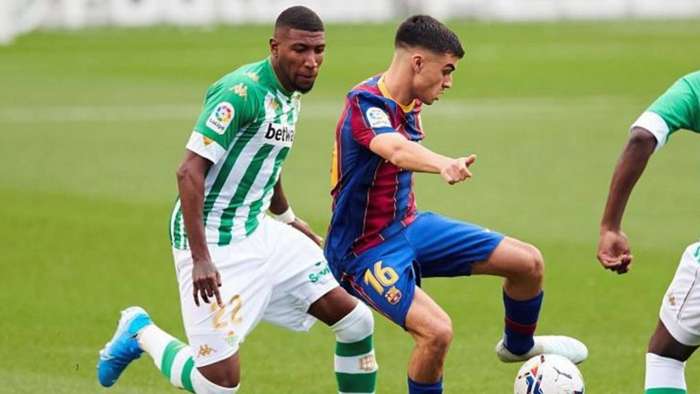 Barcelona are in the process of piecing together plans for the summer transfer window, with promising Brazilian full-back Emerson among those to be figuring prominently in their thoughts.

The 22-year-old is currently on the books at Real Betis, as they entered into a deal with the Blaugrana back in January 2019 that saw two La Liga rivals pay €6 million (£5m/$7m) each to Atletico Mineiro for the right to take a hot prospect to Spain.

That agreement was due to see Emerson remain in Andalusia until 2021, before then going on to spend the next three years in Catalunya.

Uncertainty now reigns when it comes to Emerson and his immediate future.

Betis would like the South American to remain with them on loan, while Barca have the option of pushing through a deal that would see them take sole ownership for €9m (£8m/$11m).

The Blaugrana are reluctant to see Emerson remain in his current surroundings, and the player himself is understood to be keen on testing himself at a higher level.

Goal has learned that Barca are preparing to welcome Emerson into their ranks for next season.

Interest is, however, being shown from Ligue 1 giants Paris Saint-Germain.

No official offer from France has been tabled as yet, but contact has been made as recruitment questions are asked.

Barca are believed to be looking for a minimum of €25m (£22m/$30m) from any deal that takes Emerson elsewhere.

Part of that fee, 20 per cent, would go to Betis as part of their arrangement as things stand.

Barca are weighing up the merits of taking their total outlay in Emerson up to €15m (£13m/$18m) when a fee for him could be brought in.

They also have a decision to make on a right-back already on their books, with Sergi Roberto’s contract only due to run until 2022.

He could be moved on in the next window, with USMNT star Sergino Dest now considered to be part of the present and future at Camp Nou.

Emerson could also slip into that category, but he remains in the shop window.

There is every chance that he will be selected by Brazil for Copa America or Olympic Games duty this summer, presenting him with another grand stage on which to catch the eye of Barca or a potential suitor.