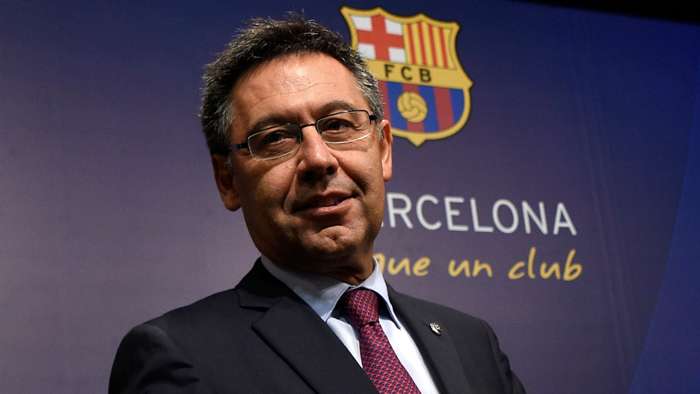 Barcelona president Josep Maria Bartomeu is facing a premature end to his tenure after a vote of no confidence was called against him.

Bartomeu’s presidency appears to be coming to an end anyway, with the next elections currently scheduled to take place over March 20 & 21 next year.

Barcelona now have 10 business days to put together a commission to give the green light and organise the schedule for voting, which should commence in mid-October.

Bartomeu's removal would require a majority of 66 per cent, with a minimum turnout of 10 per cent of the club's members, or socios.

If the vote is successful, Bartomeu would be immediately removed and a provisional board would oversee the election, which would be brought forward to December.

Victor Font, former president Joan Laporta, Jordi Farre and Luis Fernandez are all set to stand for election, and all four are thought to have signed the petition for the vote of no confidence.

Lionel Messi cited a long-standing dispute with Bartomeu as one of his key reasons for wanting to leave the club in an exclusive interview with Goal.

“I told the club, including the president, that I wanted to go," Messi said. "I've been telling him that all year. I believed it was time to step aside.

“I believed that the club needed more young players, new players and I thought my time in Barcelona was over. I felt very sorry because I always said that I wanted to finish my career here."

The depth of feeling against Bartomeu among the club’s fans is made clear by the fact so many signatures have been gathered despite there being no games at Camp Nou since August 8, and no fans allowed in. No such vote in the last 40 years has garnered such support, though there have been others in recent years.

TheMes Que una Mociowebsite explained their reasoning for calling the vote: "We know that the next election will take place in 2021. However, the current economic and sports situation at the Club forces us to act today.

"The excessive judicialization of the club, the lack of transparency of this Board, that has involved the Club in several court cases, and failure of achieving goals in sports, are just some of our reasons to promote this initiative.