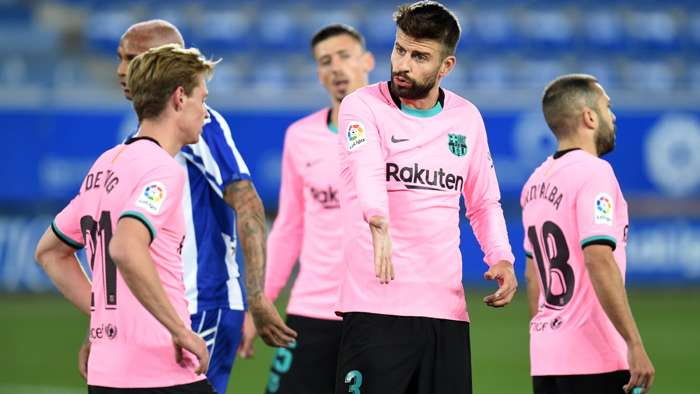 Barcelona are off to their worst start in a La Liga campaign since 2002-03 following their 1-1 draw with Alaves on Saturday.

Ronald Koeman has seen his side pick up just eight points from six games so far with Barca currently 12th in La Ligaand on half the points of league leaders Real Madrid, who have played an extra game.

Despite winning consecutive Champions League matches, Barcelona have failed to win their past four gamesin Spain's top-flight with their last victory coming on October 1 against Celta Vigo.

Since then Koeman's side have been held to draws by Sevilla, Getafe and Alaves, while they lost El Clasico 3-1 to Real Madrid last weekend.

The last time Barcelona started a season so badlythey ended the campaign in sixth - a finishKoeman will be desperate to avoid.

On Saturday, a howler fromNeto handed Alaves the lead in the 31st minute before Barca equalised via Antoine Griezmann in the 63rd minute - just moments after Alaves saw Jota sent off for a second yellow card.

Koeman's men pushed hard for the winner against 10 men, taking 25 shots to Alaves's four and boasting 80 per cent possession, but failed to find another goal as they had to settle for a disappointing point.

Lionel Messi took 10 shots across the 90 minutes but failed to get his name on the scoresheet and has now scored just once from his past 45 direct free-kicks for Barcelona.

Alaves goalkeeperFernando Pacheco proved to be the hero on the night as he made seven saves - the most by any shot-stopper in La Liga this season.

Speaking after the Alaves draw, Frenkie de Jong stressed Barcelona need to start making the most of their ascendency.

"We need to win these games," De Jong told Barca TV."I think especially in the second half we were pressing them a lot and created a lot of opportunities or chances. Maybe a bit unlucky, I don't know. The first half was not good enough."