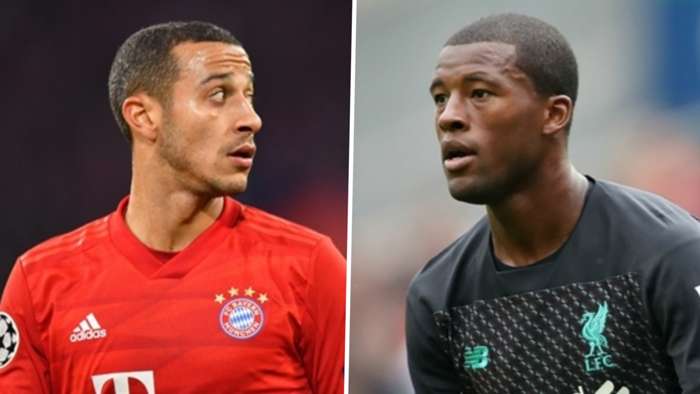 Jurgen Klopp hinted Thiago Alcantara is close to joining Liverpool from Bayern Munich and insisted the midfielder's arrival will not have an impact on Georginio Wijnaldum's future.

The Spain international bid an emotional farewell to Bayern on Friday ahead of finalising terms on a four-year contract at Anfield.

Reds boss Klopp, while unwilling to discuss Thiago's qualities until the move is official, told Liverpool fans to monitor social media channels with a transfer believed to be imminent.

"There's nothing really to say because it's not official until it's announced," he said. "I don't really know what I can say. It looks quite promising. My hands are tied.

"Probably for all Liverpool supporters it's useful to look at LFC channels today and we'll see when whatever happens.

"I think most of the things I will say, if it happens are obvious. It's tricky now for me, nothing is announced. That's all I can say.

"I can answer after something is announced. We cannot now talk about these things in a hypothetical way. We just have to wait a little bit."

Thiago's arrival is sure to increase speculation Wijnaldum will end his Anfield stay, with Barcelona tipped to make a move, but Klopp stressed that is not necessarily the case.

"If the Thiago deal happens, there's no impact on anybody else's future in a negative way," he said.

Liverpool have been linked with a number of players since lifting the Premier League last season but have so far brought in just back-up left-back Kostas Tsimikas.

With less than three weeks of the window to go, Klopp suggested the English champions could further strengthen their squad if the right opportunity presents itself.

"It's about timing," he said. "Sometimes you buy before you sell, there are different scenarios.

"The only thing that is always true for us is what we earn with football, we spend on football.

"That's a short summary of the philosophy but it's one of the key points. We work constantly on improvement. That's a fact.