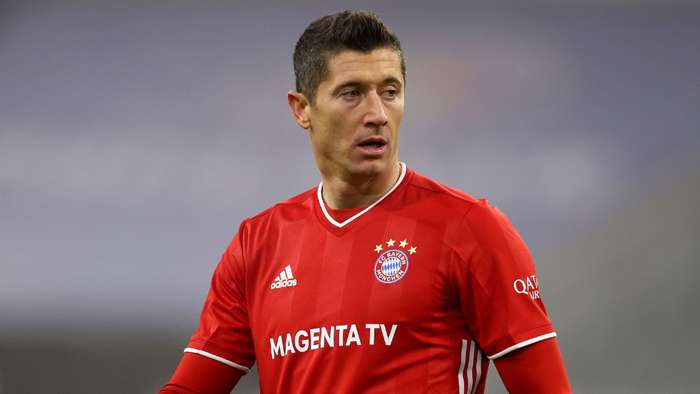 Bayern Munich have confirmed that star striker Robert Lewandowski will miss around four weeks due tosprained ligaments in his right knee.

The injury will seeLewandowski miss both legs of Bayerns Champions League quarter-final against PSG, which are set to take place April 7 and 13.

The Poland international is having another sensational campaign, scoring 42 times for Bayern in all competitions thus far.

In a brief statement on the clubs Twitter account, the Bundesliga champions said: "Robert Lewandowski has suffered sprained ligaments in his right knee. The striker will be out for around four weeks."

The striker was injuredin PolandsWorld Cup qualifier against Andorra on Sunday, a 3-0 win in which Lewandowski scored twice and was then hauled off after an hour.

Following the match,The Polish FA announced thatLewandowski would miss Wednesdays World Cup qualifying match against England due to the injury.

"Clinical tests have shown damage to the collateral ligament of the right knee,"an official statement posted to the Polish FAs website read.

"The short time remaining until the next match excludes the participation of the national team captain in this match. This would carry too much risk of aggravating the injury."

In addition to the Champions League tie against PSG,Lewandowski is also set to miss Saturdays massive Bundesliga clash against RB Leipzig.

Bayern go into the match in first place, four points ahead of second-place Leipzig.

The Bavarians also have four other Bundesliga matches in April that the 32-year-old appears likely to miss: against Union Berlin, Wolfsburg, Bayer Leverkusenand Mainz.

In addition to the effectLewandowskis injury will have on his team, the Poles personal quest to breakGerd Mullers single-season Bundesliga scoring record will now be much more difficult.

Muller scored 40 goals in the 1971-72 Bundesliga campaign, a record that appeared to be untouchable.

ButLewandowski has scored 35 goals for Bayern this term, with the club having eight games remaining in their league season.

Based on his scoring rate, Lewandowski could have been expected to easily break Mullers long-standing record, but he now faces long odds.

Should he miss a month of action,Lewandowski would have just three games remaining in which to score six goals – a feat that does appear achievable for a player so prolific.