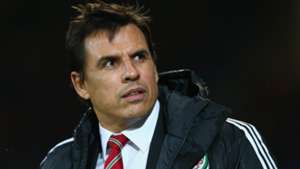 Former Wales boss Chris Coleman would like to be the first manager of David Beckham's new MLS franchise Inter Miami, but admits the ex-England captain has been ignoring his efforts to land the job.

The final pieces of a puzzle in Florida are being put together ahead of an expansion outfit joining the ranks among America's elite in 2020.

Manchester United and Real Madrid legend Beckham, whose first involvement with soccer in the United States came at the LA Galaxy, has a stadium being constructed and players being targeted.

A coach will also be required, with several high-profile figures having already been linked with the post.

Coleman, who has previously spent time working at club level with the likes of Fulham and Sunderland, is eager to throw his name into the ring.

A man who guided Wales to the semi-finals of Euro 2016 has had little joy so far, though, telling The Sun: "I want to go back abroad. The MLS is definitely an interest but it's hard to get into because it's such a growing league.

"I've left David Beckham a few messages - but he's just not got back to me!"

Coleman has plenty of experience outside of Britain, having taken in stints with Real Sociedad, AEL and Hebei China Fortune.

Having spent time in Spain, Greece and Asia, the 49-year-old is ready to spread his wings once more.

"There's only five or six managers in the world that can take a pick and say, 'I'm going there'. But that's not me," Coleman said.

"I'm in a position where I don't have to be impatient and jump on the first offer and I haven't.

"If I really wanted to be back in, I'd be back in by now -- and that's not being arrogant.

"I have a lot of experience and I'm confident in myself and the people I've got with me that we can go and affect something when the time is right."

Coleman added on his experiences to date: "Have I fallen flat on my face? Countless times. Has it put me off? No.

"It doesn't bother me. I'm not afraid by it. If you are going to fail, you have to fail big style.

"You never achieve anything going under the radar.

"Sometimes, people don't achieve because they are afraid to show everybody what they are. They shy away from it.

"And the day I don't want to put myself in the position of being scrutinised and criticised again is the day I will stop. I'm nowhere near that.

"I miss the stress of it all. I miss training every day. The games are awful, 90 minutes of carnage.

"But when you win it's a relief -- when you lose it's the end of the world. Management is so difficult when you're in it but when you are out, you miss it."