Berhalter: USMNT looking to send Pulisic back to Chelsea in a good way 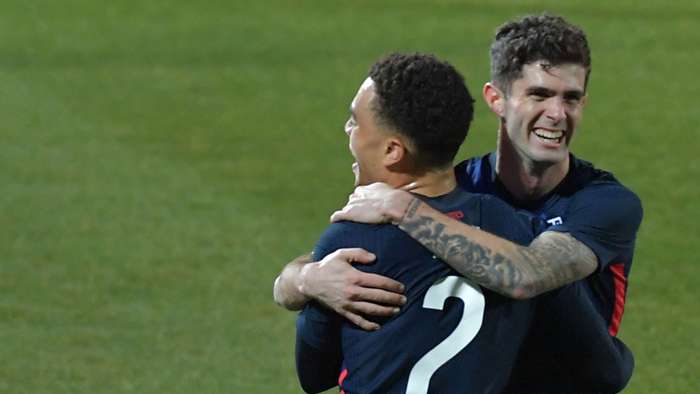 U.S. mens national team head coach Gregg Berhalter expects Christian Pulisic to feature heavily against Northern Ireland on Sunday after the Chelsea winger played just one half of the 4-1 win over Jamaica on Thursday.

Pulisic joined up with the USMNT in the midst of a difficult spell at Chelsea, with the American struggling to crack the lineup at Stamford Bridge under Thomas Tuchel.

He did shine, though, just before the international break in a FA Cup clash with Sheffield United, and Berhalter says the plan is to ease Pulisic back in throughout the two friendlies.

"It was a planned substitution," Berhalter said. "Before the game we knew he was only going to play 45 minutes, and when I think about his minutes, we want to progress him in a safe way, but we also want to help get him 90 minutes fit.

"Part of the plan was, he played something like 86 minutes for Chelsea on Sunday, somewhere around there, and then I think the natural progression is a half, and thenlet him play more against Northern Ireland, a lot more in that case.I think that will set him up nicely to gain fitness here with the national team and go back to Chelseain a good way.

"The way I saw his performance is that I thought he grew as the game went on and he became really dangerous, very aggressive coming inside, and they were compact. They had a lot of numbers and it was difficult to get his shots through but he was certainly a major factor in that first half."

Starting on the left-hand side of the USMNTs 4-3-3, Pulisic showed flashes of what makes him a vital piece of this teams attacking going forward. The Chelsea winger was quick on the ball and unafraid to take players on, as he looked to create danger up top alongside Josh Sargent and Gio Reyna.

However, Pulisic, who was making his first USMNT appearance since October 2019, did show signs of rust throughout the match as well as signs of a lack of chemistry with those around him. At times, he struggled to pick out the right pass and all four of his shots on the day failed to test the goalkeeper.

It was a similar sort of effort to the one against Sheffield United, where Pulisic had the ability to change the game but lacked that one key moment to actually do it.

Pulisics performance did provide several positives, though, especially when it comes to his still-developing partnership with Sergino Dest. Prior to Thursday, Dest and Pulisic had only been on the same field once before, and it was clear to see that the two have the potential to create absolute havoc when paired on the left.

Dest started on the left rather than the right, where he usually plays for Barcelona, and was routinely a menace for a Jamaica team determined to sit back in a low block. The Barca star beat several players off the dribble and even scored the games opening goal with a missile from outside the box. That goal was created, indirectly, by Pulisic, whose run out wide momentarily captured the defenders focus allowing Dest to cut inside.

There are some kinks to work out with Pulisic and Dest, two players that do enjoy cutting in, but Berhalter has plenty of reason to be optimistic about that pairing going forward.

Pulisic: I could have done better with Sheff Utd chances

Liverpool move for Pulisic could be ‘ideal’ - Friedel