Billy Koumetio: The Liverpool teenager who has wowed Klopp 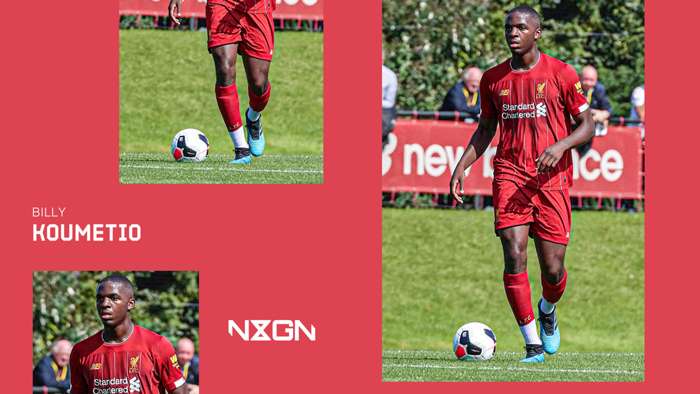 It has not taken long for Billy Koumetio to add Jurgen Klopp’s name to his list of admirers.

“Billy the Kid – he doesn’t look like a kid!” Klopp said last week. “His face looks like a kid but then all the rest is ‘wow!’”

On Saturday, supporters got to see exactly what the manager was getting at.

Ordinarily, Koumetio would have been back at Kirkby this weekend, playing for Barry Lewtas’ Under-23 side against Welsh champions TNS and picking up some useful experience in the process.

But with Liverpool’s senior side short on centre-backs, and with Klopp keen to see why academy staff are so enthusiastic about this towering teenager, there he was in the Salzburg rain, strutting his stuff alongside the likes of James Milner and Gini Wijnaldum against Bundesliga outfit Stuttgart.

Looking the part, too. Koumetio may have only played half of the second half, replacing another promising youngster in Sepp van den Berg, but his performance was an eye-catching one.

He attacked the ball, he won his headers, he competed physically and he passed the ball impressively off his left foot. Up against the giant Sasa Kalajdzic, he more than held his own.

At Kirkby they know all about Koumetio’s potential. From the moment he arrived on Merseyside, signed from French minnows US Orleans in the summer of 2018, he was earmarked as one to keep a close eye on.

That was down to his talent and physicality of course – not many young footballers are built like he is – but also his personality. Bright, outgoing and inquisitive, Koumetio has made a big impression off the field.His English is perfect, and he is able to take on board the advice given to him by coaches about his game.

“He wants to work hard, and that stands out a mile,” says one source. “Everyone loves Billy, he’s just one of those lads,” adds another.

“On the pitch I am competitive, really competitive,” says the man himself. “Off the pitch, I would say I'm a happy person, always happy. I smile all the time, even if things don't go very well.”

He hasalready been on the bench for the first team, an unused substitute at Anfield for the remarkable Carabao Cup fourth round win over Arsenal last October. “A great day,” he said, one that made him “more motivated to work harder and harder to get more chances togo there with the best players in the world.”

Koumetio also played a part, a minor one at least, on one of Anfield’s greatest ever nights. He was a ballboy for the epic Champions League semi-final win over Barcelona in May 2019 – though it was another academy prospect, the brilliantly-named Oakley Cannonier, who was responsible for helping with Trent Alexander-Arnold’s quickly-taken corner. Cannonier, if you are interested, will be part of Marc Bridge-Wilkinson’s U18s squad this season.

“It was amazing, unbelievable,” Koumetio says of that night. “It was a great experience for me.

“When I was sitting so close to the pitch and saw the big boys, they really inspired me.”

Now, of course, he is training alongside those players, the Mo Salahs and the Sadio Manes, the Bobby Firminos and the Virgil van Dijks. He is likely to feature again on Tuesday afternoon as Liverpool take on Salzburg at the Red Bull Arena before returning to the UK ahead of Saturday’s Community Shield against Arsenal at Wembley.

“I'm pretty sure he will make big steps,” Klopp said last week. “We just have to make sure that we really deal with his age group and physical demands well.”

The manager has already held at least two one-to-one sessions with the youngster, working on positioning and tactical understanding. Liverpool’s defensive system requires a high line, constant front-foot play and maximum concentration. You have to engage, you have to build attacks and you have to back yourself. You have to learn fast.

Koumetio is relatively new to the centre-back role. He was a left-winger and a left-back at Lyon, his home-town club, before being moved into the middle as an U14.

“I think it was because of my height,” he says, “but now I’m very happy because I think it’s my position and it’s better for me.”

With the likes of Van Dijk alongside him, opportunities to learn and develop should be plentiful. The Netherlands international, naturally, is something of a hero for the youngster. “Sometimes I am trying to copy him,” Koumetio has admitted.

He will return to the U23s for the start of the campaign, but fanscan expect to see him split his time between Kirkby and Melwood, as the likes of Van den Berg and Ki-Jana Hoever do, as the season progresses.

Liverpool will monitor his development closely, in particular his growth and how he adjusts to his frame. The tools are there, technically and physically, but the late-teens are a crucial period for any young player, and staff are aware there will be peaks and troughs to come.

The signs, though, are overwhelmingly positive so far. “He’s a big talent,” says Klopp. “It’s good for us to see him.”

We shall be seeing a lot more of ‘Billy the Kid’ in the coming months and years, one suspects.