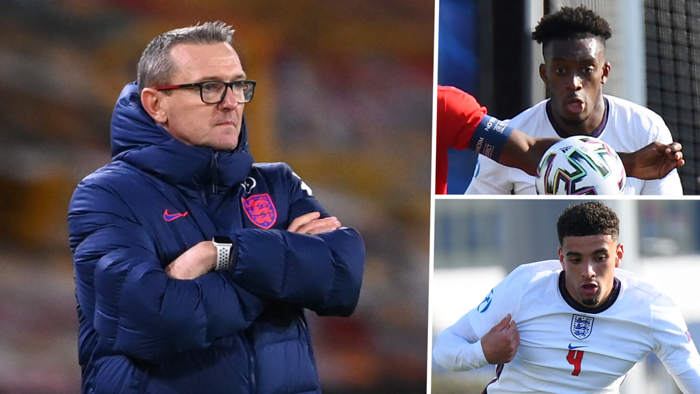 Aidy Boothroyd insists he is not feeling the pressure and is confident his England U21 side can recover following a disastrous start to their European Championship finals campaign.

The Young Lions lost 1-0 to Switzerland in their opening match in Slovenia and will likely face even tougher tests next with fixtures againstPortugal and Croatia to follow.

With his contract up in the summer, Boothroyd has, however, dismissed thespeculationsurrounding his position and is confident that his side can still recover toreach the knockout phase.

"There’s always pressure, to bring players through and also to win. I enjoy that, strangely enough. This is a challenge. I’ve met challenges like this before and won. We’ll do all we can to get a result and remain positive," Boothroyd said.

"Theres no point sulking. Whether it’s a fluke [like the Switzerland goal] or not doesn’t matter. What matters is we lost the game.

"We’ve got plenty of players through [to the senior squad] but it doesn’t deviate from the fact we didn’t do enough to win. This is what they need to go through as players and be better players and people. They are a good bunch.

"They’re very disappointed. We’ll get going straight away for our next game."

The Young Lions are without several of their best playersdue to senior call-ups, with the likes ofReece James, Bukayo Saka and Jude Bellingham all part of Gareth Southgates squad for the 2022 World Cup qualifiers.

Still, England rank among the favourites and possess the likes ofChelsea wonderkid Callum Hudson-Odoi in attack along with Arsenal duo Eddie Nketiah and Emile Smith Rowe.

There are concerns over a lack of match fitness for Nketiah, however,with the 21-year-old having not appeared for the Gunners since January.

"Theres always pressure in this country wearing this shirt," Aaron Ramsdale told reportersafter the 1-0 loss to the Swiss at the Bonifika Stadium.

"It is about how we push through these boundaries. Throughout qualifying in the first half of the season, you have three international breaks so it is longer with your team-mates.

"Throughout my time with this team, at whatever youth level, we have been very goodwhen playing this way. I think we came down with the first-game nerves [against Switzerland].

"I think we stepped off a bit and waited for magic for someone to score for us. In saying that, we were solid. Teams in this tournament are going to have chances because it is the European Championship.

"Each team has earned the chance to be here, I think we waited for someone to spark us into life. I think we need to keep playing the way we play, with combinations, shots and crosses while keeping it tight at the back. We have a lot of talent in this team and we can get through."