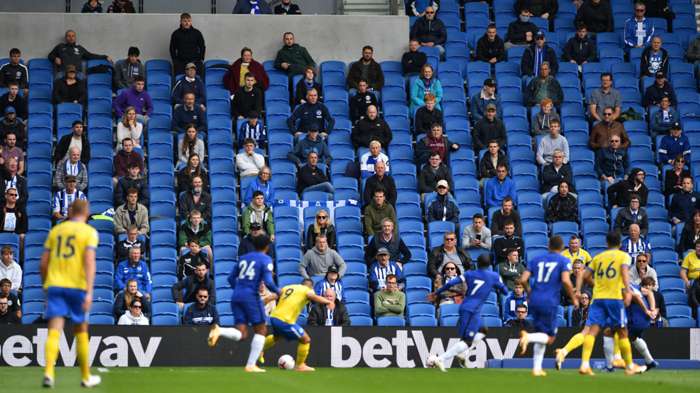 Fans in England have returned to the stands for the first time since March, as 2,500 supporters were allowed at the Amex Stadiumon Saturday for Brighton's friendly against Chelsea.

Fans at the Amex were seated in a manner that respected social distancing protocoland were required to wear masks at all times except when they were at their seat.

It was a small step toward normalcy after football around the globe was halted in March due to the coronavirus pandemic.

The Premier League, along with several other leagues in Europe, returned to the pitch in June but played all matches behind closed doors.

Saturday's match at the Amex was part of a government trial as the UK explores a gradual reintroduction of fans ahead of the 2020-21 season, which kicks off next month.

Brighton head coach Graham Potter was boosted by the return of his club's supporters, even in a limited capacity.

“I thought it was a fantastic day – a small step to getting back to normal as soon as we can safely do so,” Potter said in quotes published on Brighton's official website.

“It was so nice to see fans here because as we know it brings a completely different dynamic to the stadium and I thought they made a lot of noise and really got involved in the game. Hopefully they enjoyed the performance as well.

“I think people at the club deserve a lot of credit for the work that has gone in and hopefully it was the first successful step to a return to normal at some stage in the future.”

Saturday's Community Shield between Arsenal and Liverpool was played behind closed doors at Wembley, but the Gunners are exploringa plan to allow fans back at the Emirates Stadium in October.

In anemail sent to supporters, Arsenal said: “We are continuing to work hard with the Premier League and UK Government on plans to bring fans back to stadiums, initially with reduced capacities.