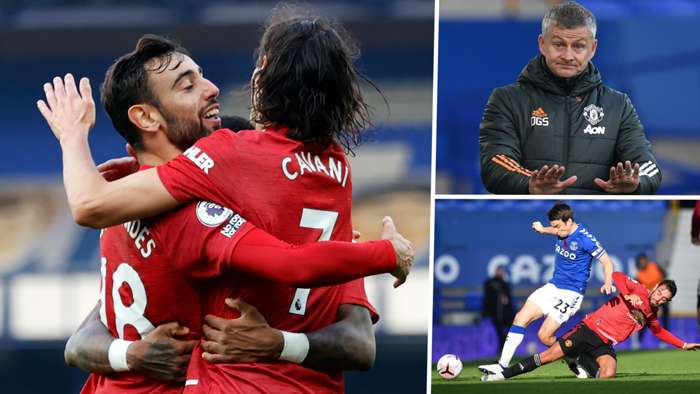 As the Man United players’ heads dropped after going behind again, it looked like the beginning of another long afternoon at Goodison Park for Ole Gunnar Solskjaer.

United had gone into the game on the back of a calamitous Champions League defeat at Istanbul Basaksehir in midweek, with the comical nature of his side's defending provoking a bitter backlash against the manager.

So, the pressure on Solskjaer only looked set to increase after Bernard opened the scoring at Goodison after United's defenders had been able to beat Dominic Calvert-Lewin to a routine long ball forward.

“Let’s go!” was the lacklustre encouragement from captain Harry Maguire, as the visitors looked to come back from behind for the third time in seven days, after the losses in Istanbul and at home to Arsenal.

However, United's lack of leadership has become a major talking point in recent weeks, thanks in no small part to the criticism of former skipper Roy Keane, and the body language of the whole side did not bode well, as they trudged back to the halfway line following Bernard's 16th-minute strike.

They looked like a side shorn of confidence. They needed more than a half-hearted rallying cry destined to evaporate in the cold November air. They needed a real leader to grab the game by the scruff of the neck and turn it back in United's favour.

The Portuguese has been a constant source of inspiration since joining in January, at a time when Solskjaer's struggling side desperately needed a shot in the arm.

Make no mistake about it: Solskjaer wouldn't have survived the 2019-20 season without Fernandes, who sparked a sensational run of form that saw United secure a return to the Champions League with a fourth-placed finish in the Premier League.

Fernandes' quality made a massive difference to United going forward, but his leadership was pivotal too.

Indeed, there was a reason why Solskjaer selected the attacking midfielder to captain the team in last month's game against Paris Saint-Germain in the absence of regular skipper Maguire.

When the manager made the announcement during his pre-game press conference, a look of surprise flashed across Fernandes' face; he clearly hadn’t been expecting it.

But everyone else had. You only need to go back to last season's trip to Goodison, where United were held to a 1-1 a draw.

Fernandes had only been at the club a few weeks but he had no problem afterwards that he was a "little bit mad" that United had failed to take all three points.When some players look to hide behind excuses, Fernandes fronts up and calls it as he sees it.

This is a character who demands more of himself, and his team-mates. He's doesn't shy away from responsibility; he welcomes it. We saw that again on Saturday when United were in trouble.

He wasn’t wearing the armband but he showed he has that drive, determination and fight needed from a United captain.

Just six minutes after United had fallen behind, Fernandes levelled matters with a towering header– from a brilliant Luke Shaw cross which ended a move of 20 passes from United.

United's second goal was all about Fernandes, too, whether he scored it or not.

The stadium announcer at Goodison awarded it to Rashford but the England striker may not have got a touch on what was a delicious ball in from the left from Fernandes.

He wasn't done yet either. With Everton pouring forward in search of an equaliser in injury time, it was Fernandes who broke clear before cleverly waiting until the last possible second before teeing Edinson Cavani up to seal a vital 3-1 win.

The Uruguayan was delighted with his first Premier League goal but this strike was of far greater significance to Solskjaer.

The result at Goodison was always unlikely to be the determining factor in his long-term future at Old Trafford but the three points will undoubtedly alleviate the pressure on his shoulders going into the international break.

Solskjaer had insisted beforehand that he was coping fine. He "trusted" his players to issue a positive response and he was right to back them.

United displayed more intensity and fight then the two previous games combined and his rotation in midfield, which saw Pogba dropped to the bench again, played a pivotal role in a morale-boosting victory, with Fred once again excellent, offensively and defensively.