Can Ancelotti get the best once again from 'spectacular' James Rodriguez at Everton? 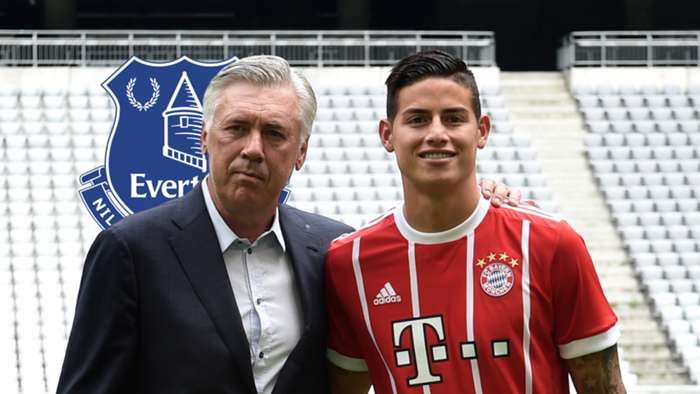 Six years ago, if anyone had dared to assert that James Rodriguez, one of the stars of the 2014 World Cup thanks to his exploits with Colombia and Real Madrid's latest marquee signing, would be taking a hefty pay cut in order to relaunch his fading career once more at Everton, any listener would have ample right to be sceptical.

James has had two great footballing mentors since beginning life as a professional at just 14 years old back at boyhood club Envigado. The first was the gruff, grizzled, chain-smoking Julio Cesar Falcioni, who as Banfield coach brought the teenager over from Colombia and incorporated him into a no-nonsense side which lifted their first-ever Argentine Primera Division in 2009.

“He was like a father to me,” James said of Falcioni to TyC Sports.“He felt and knew I had the talent to play and gave me responsibility at 18.” The second, of course, when he was already on the way to stardom, is looking forward to meeting up once more at Goodison Park: veteran Italian tactician Carlo Ancelotti.

It was Ancelotti, fresh fromChampions League glory against AtleticoMadrid back in the summer of 2014, who welcomed James to his new home after completing a reported €72 million ($85m/£63m) movefrom Monaco. His debut season under the ex-Milan boss proved James' best in Spain, as he netted 17 goals in 46 games as a regular fixture alongside the likes of Cristiano Ronaldo, Gareth Bale and Karim Benzema in the Madrid attack.

Unfortunately for Ancelotti and James, the club failed to keep up with a rampant Barcelona side boosted by the arrival of Luis Suarez to join Neymar and Lionel Messi up front. Barca won the treble and by the end of 2014-15 Ancelotti had been relieved of his duties.

A subsequent muscle tear saw James miss much of successor Rafa Benitez's brief reign and it soon became clear that rookie new coach Zinedine Zidane did not hold the Colombian in the same esteem as his forebears, leading to long spells on the bench and a general drop-off in form and consistency while his team-mates hit glittering new heights.

There would be a further opportunity for Ancelotti and James to team up, during a loan spell at Bayern Munich in 2017-18 as the player fell further out of Zidane's plans,in stark contrast to the high opinion the Italian holds of his former and possibly future charge.

“People think that I played James because the Real Madrid president had spent a lot of money on him after the World Cup, but I was not influenced by that,” he explained in his autobiography.

“Money does not matter once the player is at the club; I wanted James on the wing for his talents as a footballer. He is a hard worker and not selfish at all: an authentic professional.” For his part, James explained to El Chiringuito earlier this year: “I joined at Madrid a super coach: Ancelotti. He knows so much, he knows how to manage teams and I had his total trust, I played a spectacular season. It was a fantastic year.”

At 29, the playmaker is not quite into make-or-break territory. But having failed to convince Zidane of his talents over the years at Madrid and falling short with Bayern, who declined to exercise his purchase option following a two-season loan, he was running out of options.

Everton is certainly an intriguing choice. The Toffees looked like relegation candidates at the start of 2019-20 after a disastrous start to the season, but the arrival of Ancelotti just before Christmas galvanised the team and they eventually claimed 12th place after tailing off towards the end of the coronavirus-interrupted campaign.

The talent is doubtlessly there for Everton to make an impact on the top half of the Premier League table; the issue, however, has been getting the best out of players whose performances consistently fall below expectations.

While Brazil star Richarlison and the promising Dominic Calvert-Lewin returned impressive figures for 2019-20 the same cannot be said for the likes of Moise Kean, Theo Walcott, Gylfi Sigurdsson, Bernard and Alex Iwobi, who made scant contribution to the team, leaving Ancelotti with a bloated, unwieldy and expensive squad, particularly in the final third.

While that huge salary commitment for so many under-achievers will have to be addressed, there is nevertheless room for optimism around the blue half of Merseyside. As well as James, Everton have been linked to battling Napoli midfielder Allan and Atletico full-back Santiago Arias, a statement of the club's ambition after treading water while arch-rivals Liverpool waltzed to thePremier League title.

Reports suggest that Jameswill cut his annual salary of €8.5m almost in half to seal the deal and he willlikely be at the centre of Ancelotti's plans as the Italian looks to compete with the division's big boys over the coming campaign.

It is easy to look at James' decision as an act of desperation to push his career back on track. With all due respect to Everton, the Merseysiders are not in the same league as the likes of Madrid and Bayern, and even in English football currently sit several rungs down the ladder from Liverpool, Manchester City and the rest of the league's heavyweights.