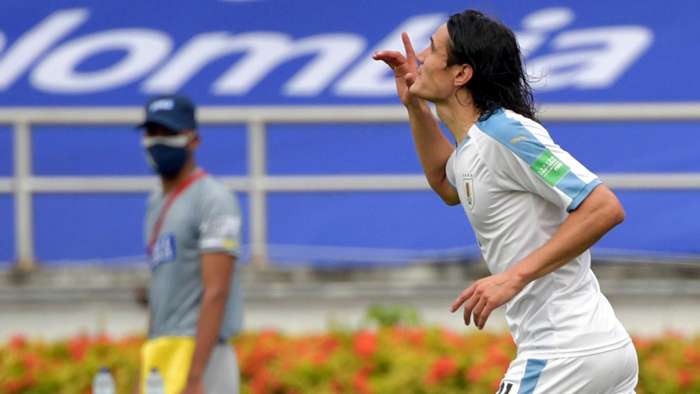 Edinson Cavani is a "great attacker", according to Marquinhos, who has admitted that the Manchester United striker helped him raise his game at Paris Saint-Germain.

Cavani spent seven years playing alongside defender Marquinhos at Paris Saint-Germain after they both joined the Ligue 1 giants in July 2013.

The Uruguayan left PSG at the end of the 2019-20 campaign as the club's all-time record goalscorer having found the net 200 times.

Indeed, only Lionel Messi (432) and Cristiano Ronaldo (416) have scored more goals in Europe's top five leagues since Cavani (250) debuted for Palermo in 2007.

Cavani will come up against his old team-mate when Uruguay face Brazil in a 2022 World Cup qualifying clash on Tuesday, fresh from his goalscoring turn in a 3-0 win over Colombia last week.

The Selecaohave won all three of their qualifiers so far, but Marquinhos says they need to be acutely aware of the danger posed by Cavani – who joined United on a free transfer in October –in Montevideo if they are to extend their perfect start.

"For me, it was very good to work with Cavani because he is a great attacker,"The PSG star told a pre-match press conference. "In confrontations, you had to be very careful with him and try to cancel him in the best way.

"I really like to face great attackers, to be able to raise my level and train in the best way. That is what makes you improve and grow every day.

"Cavani is a very decisive player and one who gives a lot to his teams. We know how important he has been for his team. He plays everywhere on the field, attacks and defends.

"We will have to be 100 per cent focused because at the slightest mistake, he can score a goal."

Cavani's effort against Colombia markedhis 51st international goal in 117 appearancesfor Uruguayand he will likely start up front alongside Luis Suarez again against Brazil, with the Atletico Madrid strikeralso scoringin the victory in Barranquilla.

Marquinhos is well aware of the danger posed by the potent pair, but he remains quietly confident Brazil's defence hasenough experience to keep them quiet.

"We are always concerned with the great attackers," he added. "They are players that I will have to face individually, but ours is a collective work.