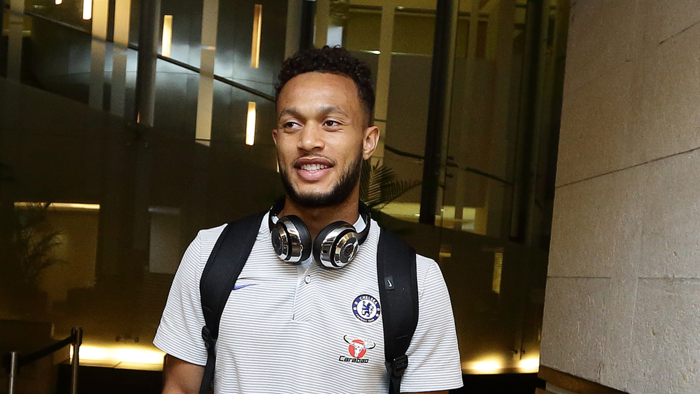 Chelsea loanee Lewis Baker is in Istanbul as he readies himself for a medical at Trabzonspor after the two clubs agreed on a season-long loan move with an option to buy.

Newton got to know the 25-year-old while heading up the loan department and he briefly spent time on Frank Lampard's coaching staff before moving to Turkey in the winter.

Initially, Newton moved to work as the assistant manager but he now manages the club after winning the Turkish Cup in his brief time as caretaker boss.

Baker has already been pictured arrivingin Istanbul airport and he will now fly to Trabzon to complete his medical at his new club.

He is not the only arrival from England with Stoke City's Benik Afobe already having arrived on loan for the ambitious Super Lig side.

The Chelsea loanee played in two friendlies with the Blues ahead of the move to ready himself. He recently faced Wimbledon in a behind-closed-doors match that ended 1-1 with Victor Moses netting a second-half goal from the penalty spot.

The academy graduate has lost his way in recent seasons despite having been considered one of England's top talents previously in his career.

A falling out with manager Friedhelm Funkel at his last loan move saw him return early in January from Bundesliga side Fortuna Dusseldorf.

"He's in London and supposedly sick, I can't check that," Fortuna Dusseldorf coach Friedhelm Funkel toldBildin January 2019. "Usually he would have been here. I don't know what the reason is that he isn't here.

"What I know is that Lewis Baker wasn't in the squad against Union Berlin before Christmas and should have trained with the others at ten in the morning.

"But he just wasn't there during this training session. There was no excuse in advance. When he wasn't playing, he wasn't even in the stadium. All other players who are not part of the squad were there and were happy with the others. He was not. That has some meaningfulness...

This came after mixed loan spells at then Championship sides Leeds United, Reading and Middlesbrough.

The England Under-21 international had a very successful spell at Vitesse prior to that and also won the Toulon Tournament in 2016 before winning the Dutch Cup in 2017.

Chelsea will next look to place a host of other potential loan stars with Jake Clarke-Salter in talks with a host of Championship sides. Baba Rahman and Matt Miazga look set for overseas moves, while Nathan Baxter is also considering his options.

Baxter is operating as the Blues third-choice goalkeeper until they bring in Edouard Mendy from Rennes with talks expected to lead to a medical in the coming days.

Tiemoue Bakayoko's protracted talks with AC Milan are continuing, while Davide Zappacosta will likely end up in Serie A having now been linked with a season-long loan move to Genoa.

Meanwhile, West Brom are on the verge of announcing a deal for Conor Gallagher after he renewed his contract at Chelsea to allow the move to go through.