Chiellini to be evaluated while Dybala still not 100 per cent, Juventus boss Pirlo says after Champions League win 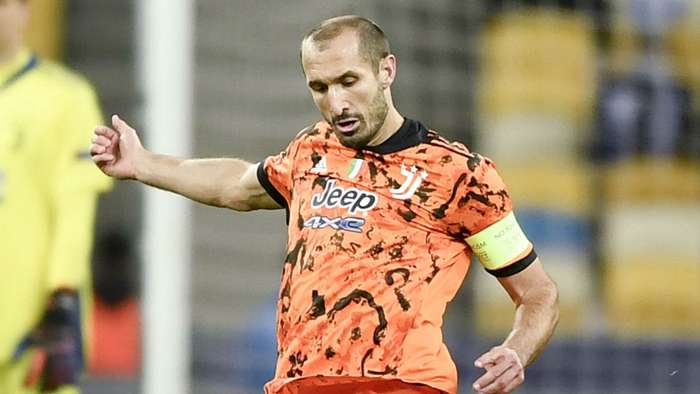 Giorgio Chiellini will be examined after going off injuredin Juventus' win at Dynamo Kiev, according to Andrea Pirlo, who said Paulo Dybala is still not 100 per cent fit.

Head coach Pirlo described Chiellini's injury as a hip flexor issue that he had been dealing with after the recent round of international fixtures.

"We will evaluate him in the coming days," Pirlo said.

Dybalahad previously not played a minuteunder Pirlo and was reportedly involved in a clash with Juve directorFabio Paratici after being left on the bench for the 1-1 draw with Crotone at the weekend.

Pirlo also admitted that Dybala was "angry"at being left on the bench for thedraw at Crotone.

Speaking to Sky Sport Italia, Pirlo saidof the Argentina forward: "He wasn't 100 per cent.He needs minutes, slowly we will see him in top condition."

Juve have made an uneven start to their first season under the leadership of former midfielder Pirlo.

They are four points adrift of Serie A leaders AC Milan following the slip-up at Crotone, but they were in control throughout against Dynamo as Morata made it three goals for him in two matches.

"One step at a time we find the balance," Pirlo added."We could make better use of a few chances in the first half and manage the game better.

"It was important to play a solid match compared to Crotone."

Juventus will return to Serie A action on Sunday when they face Hellas Verona at Allianz Stadium before their Champions League showdown with Lionel Messi and Barcelona next week.

Juve star Cristiano Ronaldo is in doubt for the match against Barcelona after he tested positive for Covid-19 while on international duty with Portugal.