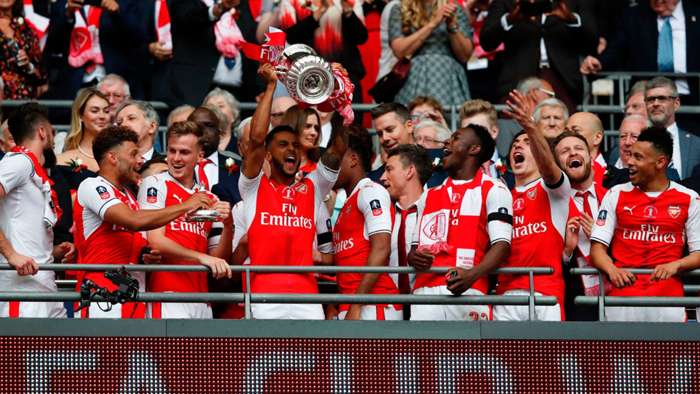 The FA Cup was once considered among the most prestigious trophies in the game, but it has seemingly lost its appeal in more recent times, with a number of top sides electing to field weakened squads while prioritisingthe Premier League.

Newly crowned top-flight champions Liverpool were knocked out by Chelsea in the fifth round this season, as Jurgen Klopp shuffled his pack to cope with fixture congestion.

Ole Gunnar Solskjaer was criticised for making similar changes when his Manchester United side were beaten 3-1 by the Blues in the semi-finals, with Arsenal legend Paul Merson among those to point out that managers are judged on the trophies they win above anything else.

Former Arsenal winger Walcott, who boasts a treble of FA Cup wins on his CV, is adamant that the romance of the competition is still very much alive despite how it is now viewed by some of England's elite coaches.

The 31-year-old, now of Everton, told Talksport of his fondest memories with the Gunners: “Being an English player it was always been dream to play in the FA Cup, let alone win it three times.

“People say the love of the FA Cup is not there anymore, but that’s complete rubbish in my opinion, it’s a cup that every player looks back on and wants to win.

“I’m one of the lucky players to have won it, and there are guys in the Everton dressing room who would bite off my hand to be in the a same situation.

“Just looking back at all my shirts, not many players swap shirts anymore but I’ve obviously been around a long time and I look back at the 2005 and 2006 shirts, I’ve got a shirt from Leighton Baines that I managed to get him sign, little things like that mean so much to me.

“They might not mean much to anybody else, that’s fine, but I can show these to my kids, the medals as well, that’s what it’s about.