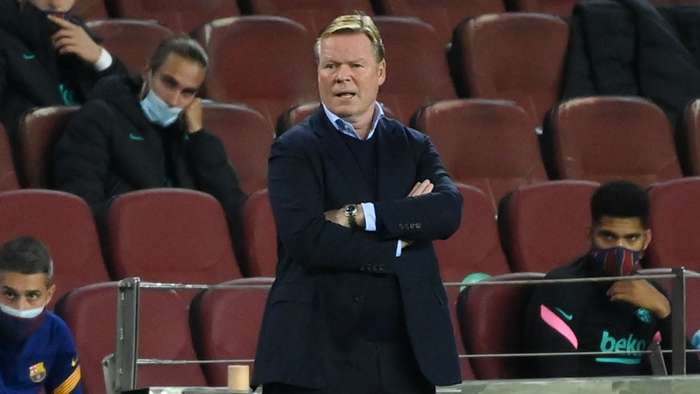 Barcelona must find their way past the minnows who stunned Atletico Madrid after being drawn to face neighbours Cornella in their Copa del Rey opener.

Cornella's Camp Municipal stadiumis situated less than 10 miles away from Barcelona's Camp Nou, making it a dream draw for the Segunda B side.

The two teams have never met in a competitive match, though Barca B are regular opponents ofCornella in Segunda B.

Koeman's side are currently third in La Liga after an inconsistent start to the season, though they are unbeaten in seven matchessince a 3-0 defeat against Juventus in the Champions League at the start of last month.

Saul Niguez hit the woodwork and Lucas Torreira went close with a free-kick, but the visitors could not find a way past a stubborn Cornella defence. Ricard Sanchez's dismissal for a second yellow card rounded off a miserable evening for Diego Simeone's side.

Simeone was magnanimous after the game, choosing to praise his opponent rather than criticise his side too harshly.

Cornella areone of six teams from the Spanish third tierremaining in the competition and Real Madrid will face another of those in the form of Alcoyano, who beat La Liga strugglers Huesca this week.

Athletic Clubface a trip to tackle Ibiza, while Real Sociedad will play Cordoba.