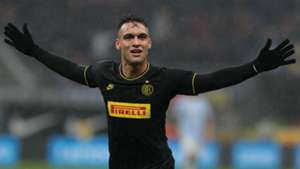 Hernan Crespo has described Lautaro Martinez as a "complete player" and wants the forward to snub Barcelona in favour of remaining at Inter.

Lautaro, 22, is being heavily linked with a move to the Liga giants after an impressive season at San Siro, scoring 16 goals in 31 games in 2019-20.

However, ex-Inter and Argentina striker Crespo believes a fellow countryman should stay put and establish himself further before moving on.

"I would like him to stay at Inter because this has been his first year as a starter," Crespo told David de las Heras on YouTube while discussing Lautaro's future.

"I wish he had a bit more of a solid foundation before another change comes. Trains slow down at the best stations and Lautaro is one of them."

The 44-year-old likes what he has seen from Lautaro, who also has nine international goals in 17 appearances for Argentina.

"He is a very serious and focused boy. I really like that. He has a lot of personality," Crespo added.

"He is a complete player who can play in attack both alone and accompanying another striker."

Crespo also reserved praise for Lautaro's international team-mate Lionel Messi, who continues to set the standard as the finest footballer in world football at the age of 32.

The 44-year-old said of a six-time Ballon d'Or winner's unique impact on the game: "What I admire about Messi are the forms, the way he achieves things and his consistency.

"They kick him millions of times and he gets up and continues playing. Respect the opponent and the game to the fullest. This is an example that transcends beyond soccer."

Messi and Lautaro are both gearing up for a return to the pitch in La Liga and Serie A respectively, with the coronavirus-enforced break in the season set to draw to a close.

The Spanish top-flight is set to kick-off again with Sevilla against Real Betis on June 11, while Italian football fans can look forward to a full schedule of action across their top three leagues on the weekend of June 20.