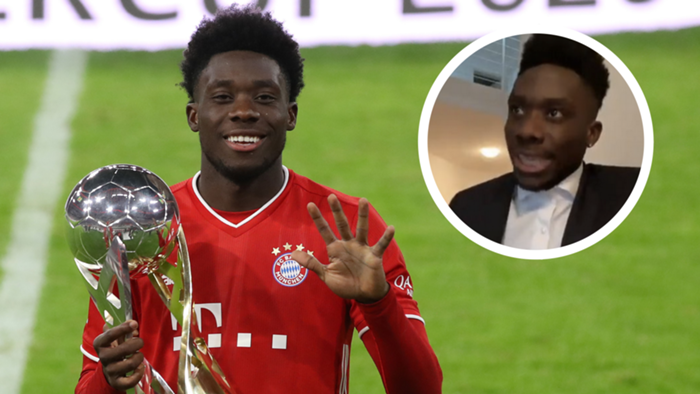 Alphonso Davies' treble win at Bayern Munich saw him break through onto the world stage last season, but for the rapper and former Canada international Tam Nsaliwa, it is the right-back's off-field confidence that underpins his success.

Meanwhile, his online persona has seen him amass 41.3 million TikTok followers through his ability to sing and create comedy videos for his supporters.

Like Davies, Nsaliwa grew up in Edmonton after moving from Africa– in his case, Malawi. Nsaliwa also made the jump from Canada to Germany as a young professional.

"I am his biggest fan and I love everything about this kid. He is absolutely fearless," Nsaliwa, who raps under the aliasWazZzaY, toldGoal. "He is confident to be who he is. He can talk about where he has come from and almost 99 per cent of all other footballers who have had that intense spotlight on them stay inside their shell.

"They are afraid to express themselves freely for the fear that if things don't work out on the field, then that expression will be why they haven't done well. He has taken advantage of all his opportunities. He is the opposite to the average footballer and it shows on TikTok and social media.

"He has no fear that it will hurt his performance on the field and that's what makes me his biggest fan. He is breaking the mould of Canadian footballers that put their head down, focus on the field and don't do much more. He is completely breaking that; I love it.

"Jonathan David at Lille is also brilliant. These two players make me proud to be a former Canada international and a supporter now in general.

"The kids are looking at Davies in Canada and showing that it is possible to do this. For me, it was Owen Hargreaves, but now Davies is like Hargreaves inspiring Canadian soccer fans on maybe an even bigger scale."

Davies' inspirational story began when he wasborn to Liberian parents in a refugee camp in Ghana and he has since gone on to become one of football's most recognisable stars.

Nsaliwa is now looking to make a cultural impact of his own – through music– after retiring from a playing career that spanned seven countries, including a spell at AEK Athens alongside Rivaldo.

That period has led to a two-way love affair with the Greek giants that Nsaliwa has turned into a musical tribute. 'Come To The Stadium' is a homage to Nsaliwa's time at AEK which went viral in Greece upon its worldwide release.

"AEK was the pinnacle of my career," he added. "Rivaldo signed the summer that I signed and he was my idol. It is like a kid now joining a club and then Lionel Messi or Cristiano Ronaldo follows you.

"It was a good team. A far as we are concerned, we had won the championship only for a decision that didn't go our way. Things don't always work out as you hope in the Greek market, let's say. But I will never forget that period of my life.

"I had been making music since the time I left AEK, I presented myself as a musician when I retired and ever since the fans have been asking me to do a song about the club. The song references a famous AEK win over Olympiakos where Rivaldo redeemed himself against his former club in a 4-0 win.

"I also reference the Greek Cup final that was called the game of the century, as it was 4-4 and the penalties went on forever. I thought it was going to just be for fun and I didn't speak Greek, so I have used Google Translate a lot!

"It is half in English and half in Greek and had a great reception and gone viral. There was a funny moment where I released a teaser clip and mispronounced the Greek word 'squad' and ended up saying 'p*nis'. I was trying to say my 'squad goes hard!' But it has turned into a serious, quality song."

For all the highs of Nsaliwa's career, there were also lows, which mainly came after moving from Canada to German club Energie Cottbus aged 16. A series of racially aggravated incidents led him to reject two professional contracts at both Cottbus and Hertha Berlin before getting his career back on track.

"It wasn't easy in East Germany at the time," he added. "I went there and I was on my own trying to get through it. I had to deal with more than most 16 year olds at the time. There were a few occasions I would never forget.

"I was at a cafe and a guy was making monkey noises at me and flashed a butter knife towards me and we almost fought. Another time, I was in Berlin and I was playing in a school team in Berlin.

"I went back to a hostel that I was staying at after the match and three guys approached me with dogs; they were skinheads. One of the guys had just got out of jail and he wanted to do something.

"I had to run away, so I ran and my team-mates blocked these guys so they couldn't get to me. These kinds of things made me feel unwanted and in the wrong place, so I left and went back home. Energie Cottbus offered me a professional contract and I just rejected it because it was too much.

"Hertha Berlin wanted to take me as a player, too, but I couldn't see myself playing football in that area. I went back to Germany after a spell in Canada, but I never found it easy there. I just stuck at it because I really wanted to be a footballer."