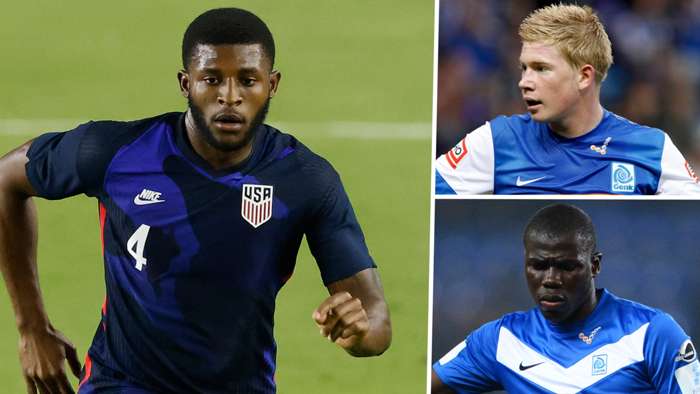 In an era where you see the U.S. men's national team's top stars playing for the likes of Barcelona, Juventus and Chelsea, Mark McKenzies' move to Genk does notreally stand out.

On the surface, McKenzie's move to Belgium is far from what would be described assexy.

But, while Genk may not have the allure of some of the clubs mentioned above, it does have a track record of creating superstars,

And so while McKenziemay not have signed for a Champions League contender, he did just join one of the world's top talent factories.

On Thursday, the Philadelphia Union confirmed the news many knew was coming, announcing McKenzie's $6 million move to Belgium.

It came after months of speculation and transfer rumors, linking him to Celtic primarily as well as teamsin the Premier League and Bundesliga.

But, in the end, Genk won out, and they did so because of what they can offer: a realistic path to success.

There are no guarantees in this sport, and it is not a sure thing that McKenzie's move to Genk will be the right one, but it is one that gives him the chance to follow some of the sport's biggest names to the top level.

“This is the right step for both Mark and for the club, as our young talent continues to make strides within our organization,” said Union sporting directorErnst Tanner.

"We are so proud of Mark and the winning mentality he brings to every match and training session, and we know he will continue that at Genk, which gives him every opportunity to reach all of his goals.”

In recent years, Genk has become a "trampoline for talent" , emerging as one of the top producers of young footballers. A number of the game's brightest truly began their careers at the Belgian club, which has profited heavily from exporting the next generation of stars.

Among them are local talents such asKevin De Bruyne, Thibaut Courtois, Divock Origi and Christian Benteke - all of whom went onto shine in some of Europe's 'Big Five' leagues as well as become full internationals.

But it hasnotjust been a launchpad for Belgian players.

Kalidou Koulibaly, the Napoli star that could become one of the world's most expensive center-backs, spent two years with the club before becoming one of Serie A's best.

Bayer Leverkusen star Leon Bailey got his big break with the Belgian side, as did Wilfried Ndidi, who spent two years with Genkbefore becoming a Premier League regular with Leicester City.

"Genk bring together young players, they try to make them understand football properly, you know," Ndidi told Goal in 2017 . "It was difficult when I came in it wasthe first time I came to Europe.

"I stayed with a family who tried to make me feel like I was at home. There were alsodifferent managers with different methods, but they always try to keep the players in the first-team young and they give them a chance. They train them well and seem to find the right players."

McKenzie, like Ndidi, will now embark on his first European experience. After emerging as a Best XI caliber defender in MLS, he'll head toa league that represents a modest step up in level, depending on who you ask.

But, while the step up in level is nice, it is not the sole purpose of this transfer.

The first thing this move will do is push McKenzie out of his comfort zone. Having risen with the Union, he will now look to navigate the pitfalls of European soccer.

And, perhaps most importantly, this move puts McKenzie right back into the shop window. Genk does notbuy foreign players to build around; they buy them to sell.

As a known exporter of talent, Genk draws eyes from Europe's top teams, and those eyes will only multiply if the club can earn a spot in the Europa League or Champions League in the coming years.

As for the Union, this move is a total win-win. It proves that this is a club that can export talent , having already sold Brenden Aaronson to Red Bull Salzburg recently .

Like McKenzie, Aaronson's move puts him right into the shop window, providing him with the metaphorical step upwhile also giving the Union a nice sell-on fee.

McKenzie will now look to make the most of it, as he remains in a battle for a USMNT spot. The center-back position has plenty of contenders, but thriving in Europe would provide a massive lift as the U.S. begins a 2021 campaign featuring World Cup qualifying, the Nations League, the Gold Cup and the Olympics.

"I have the confidence in myself to play well for theUSMNTif I get the opportunity," he told Goal in September as transfer rumors swirled . "I'm very confident and capable of representing my country and playing as the central defender.

"I think I’ve shown that ability. I'm not perfect and I can improve on my composure while playing out from the back, stepping into the midfield and cutting out passes. I'm not the perfect defender but I’m improving.

"I have the confidence to go there and compete. And I’m sure If I get an opportunity, I will grab it with both hands."