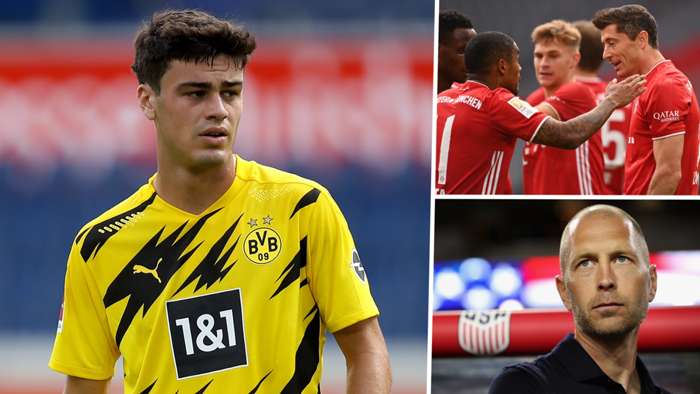 A clash with Bayern Munich looms. Then, he'll jet off to Wales for his U.S. men's national team debut, his long-awaited first chance to truly establish himself as American soccer's next big thing.

So, over the next week, he'll face a different kind of test, a ratcheted-up version of the one he's been dealing with all along. He's been anointed Borussia Dortmund's lottery ticket , as the USMNT's next world-class talent. That comes with pressure and, although the spotlight has been fixed on him since birth due to his famous last name, it's never been brighter than at this very moment.

On Saturday, Reyna will almost certainly be a vital part of German soccer's biggest game:Der Klassiker. The season is still young, andSignal Iduna Park will be quieter than usual, shorn of the famous yellow wall due to coronavirus-enforced restrictions.

But this game, at least for Dortmund, is a chance to lay down a marker, to say, "We're here and we're going to be a problem."

It's a statement that has been hinted at, but never truly made in recent years. Bayern, who absolutely tore through Europe last season en route to a Champions League crown, have won eight straight titles.

They finished 13 points ahead of Dortmund last season, battering them 4-0 at home in their first clash before edging their rivals 1-0 in the return fixture. That 4-0 win was Hansi Flick's first game in charge and, since then, the Bavarians have never truly looked back.

But this season, Dortmund have hope, albeit a slim hope. Bayern remain a machine, but Dortmund have some serious firepower of their own.

Erling Haaland is perhaps Europe's best young striker, a player that can actually go goal-for-goal with Robert Lewandowski. Jadon Sancho, fresh off a summer flirtation with Manchester United, is a nine-figure player, one that is now coming into his own.

And then there's Reyna, a player that is perhaps a little ahead of schedule. The American is just 17 years old, although his 18th birthday will come next week. He's grown up with Bayern's dominance and now he's determined to play a pivotal role in ending it.

"We're not going into the season expecting Bayern to be champions," he told Ruhr Nachrichten before the start of the 2020-21 campaign. "We expect to become champions.And I think our chances are pretty good."

So far, Reyna has backed those words up. He bagged a goal in Dortmund's Bundesliga opener against Borussia Monchengladbach in September and then recorded three assistsin a 4-0 triumph against Freiburg last month, becoming the youngest ever Bundesliga player to hit that mark in one game.

After being left out of Dortmund's Champions League matchday-one loss to Lazio, he's started in their last two group games: a pair of wins, over Zenit and Club Brugge, that have significantly boosted their hopes of qualifying for the last 16.

However, while Champions League success would be great, Dortmund's primary objective is sustaining a Bundesliga title challenge. They'll need every player to be in top form but, perhaps most of all, they'll need Reyna's creativity, and his hunger.

"I've been a part of two Klassikers so far and they've both been really tight games with a lot of quality on both sides," he recently told the Bundesliga's official site ."I think both teams know that whenever they play each other it's going to be a battle and we both want to win so badly.

"It's going to be a tight game and I think we're going to have to have a really good game to beat them because they won the Champions League and are a top team. But in the last game, they barely beat us, so I think we're definitely right there and can beat them next time."

He added: "It's really, really important I think because a team like Bayern rarely slips up, so we just need to try to take as many points as we can from every game. Obviously to take three from them would be a huge plus for us."

Even if Dortmund do win, even if Reyna and Co. pull off the relative upset and announce their status as true title contenders, the teenager will have little time to celebrate what would be a massive achievement. There's national team camp to worry about, after all, and Reyna may just be the most anticipated inclusionin that camp.

His USMNT debut was supposed to come at March, just a few weeks after he made his Dortmund debut and truly announced himselfas a senior player. But the best-laid plans often go awry, especially in the year 2020.

So, here he is now, one of 10 uncapped newcomers joining the team. Most of those newcomers, players like Chris Richards and Konrad de la Fuente, are seen as players for the future, albeit the fairly near future if everything goes to plan.

But Reyna is a player for the here and now, despite never playing at the senior level.

Despite his tender age, much of the discussion hasn't been around if Reyna will play, but rather where Reyna will play. Does he start opposite Christian Pulisic– if the Chelsea star is fit– giving whoever starts at No. 9 two top-level wingers to create alongside him?

Or does he start as a No.10, with Weston McKennie and Tyler Adams cleaning up messes, allowing the U.S. to add on another attacker while freeing Reyna to drift into areas where he can be truly dangerous?

USMNT coach Gregg Berhalter has generally gone with a 4-3-3, and he's said that Reyna's beginnings may just be on the wing. But he isn't married to the concept. What he's most concerned with is making sure the talented teenager is involved as often as possible.

“I don’t think we need to necessarily define where he’s going to be playing," he said. "What we want him to do is impact the game offensively. We want him to score goals and make assists. I think that’s important.

"We’re going to put him on the field to do that. I don’t think it’s really important to get specific about where; I think it’s what he’s doing on the field. We want him making goals and assists.”

And he'll almost certainly provide a few of those for the U.S. in the coming years. Reyna expects to be a key figure in the run-up to, during and beyond the 2022 World Cup.

Headlined by the likes of Pulisic and Reyna, the U.S. has a young core that should be in place for years to come, and it will take some very special players to displace these up-and-coming stars over the next decade or so.

Reyna is the American Dream, Haaland says. And he's Dortmund's lottery ticket. He's a unique combination of lots of hard work and a few good bounces.