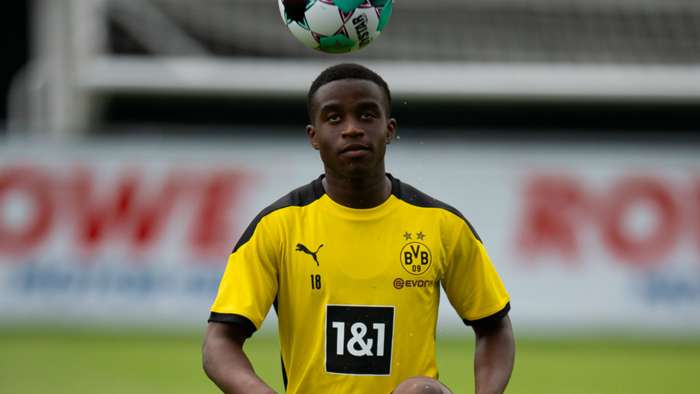 Regulations in Germany's top flight mean Moukoko will not be able to make his competitive debut until he turns 16 on November 20, but he will be getting up to speed during the intervening period.

"Lukasz Piszczek helped me a lot, but Emre Can and Julian Brandt also support me," he told Bild.

On 35-year-old full-back Piszczek, Moukoko added: "He pulled me straight to the side and said, 'Just have fun, be yourself and don't be afraid with us professionals'."

In the meantime, Moukoko still has ambitions in the youth categories.

The son of former USA international Claudio Reyna, the youngster has paid tribute to the role of his late brother Jack in his formative years as a footballer.

Jack died of cancer aged 13 when Giovanni was nine.

"It was Jack who got me excited about football," he told SportBild.

"People always think that I became a footballer because my dad, Claudio, was already a professional.

"But it was my late brother who sparked my passion for football. Without Jack I wouldn't be at BVB today."

Reyna made 15 appearances in the Bundesliga last term and has said he's looking to follow in the footsteps ofDortmund's England star Jadon Sancho.

Reyna added: "Jadon's first steps when he starts dribbling are unbelievable - wow! I try to learn from him in every training session, because his development here at BVB is an incentive for me."